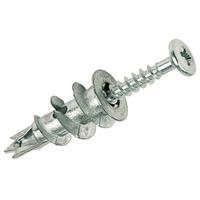 Although I’m a remarkably fantastic individual in pretty much every area, there’s one thing that I’m really not the best there is at. DIY. I try. I really do. But things just don’t always work.

Take last night’s surround sound speaker setup for instance. I’ve got four speakers to hang on the wall, one in each corner of the room. Running cables was easy – the carpet lifts up and there’s space between the grip rods and the skirting boards. The cables are run up the walls in the corners using low-profile mini trunking, which is the same colour as the wall (and, in three of the corners, out of sight behind furniture). And yes, I know how to wire a speaker and an amp. Even if the + and – cables are indistinguishable from each other.

The problem came from the screwing-the-brackets-to-the-wall bit. The walls are plasterboard, so I don’t want to just bang a screw in as it’ll all go horribly wrong. I’d already tried using some hollow wall anchors for something else in the room, but they were no use – they require a bigger gap between the plasterboard and the wall behind than I had.

It was then suggested I use some self drill plugs. I used a few to anchor some bookcases to a wall, and to put a curtain rail up, and they worked really well. Couple of those in each speaker bracket, job done – right? Of course not. That would be too easy.

Screwing the first two in for the first bracket was harder than I was expecting. They just didn’t want to go in. Eventually, and some serious screwdriver palm-burn later, and they were in the wall. Only to fall out again once I’d put the speaker on it, leaving two huge holes. Rubbish.

That left me a bit dejected. Yet again, another 10 minute job took far too long and was then incomplete and ruined.

Some inspection of the holes left, however, gave me a bit of hope. The drill plugs had hit metal: Of course! I’d not checked for stuff behind the board! Some careful listening to the notes produced by the back of a screwdriver tapping the wall in various places confirmed it, and I found a metal-less bit of wall to try again in. Success! I then quickly upped a pair of rear speakers without a problem. Seems I’m not entirely useless.