When I got my Megadrive in the early 1990s, it was for one single game – Sonic the Hedgehog. I’d played it often at the local game shop, and didn’t just want it, I needed it. Once I had my own Sega console to play it on, I was hooked on Sega games. In fact, for a good decade or so, I loved pretty much all of Sega’s major-title output – I suppose I was a Sega Fanboy (although Mario was still, perhaps, the best game series I’d ever played at the time).

When the Dreamcast failed to take over the world, and Sega decided to become a software-only company, they still produced a few excellent games. For a while. A port of Sonic Adventure 2, and the new Super Monkey Ball title were launch-day purchases for my Gamecube. Super Monkey Ball 2 and Beach Spikers were also excellent.

But something was happening. Several wrong turns (notably with the Sonic games – Sonic Heroes and the awful, awful Shadow the Hedgehog) turned into complete car crashes, and soon the good games left were ports or updates of earlier Sega games.

Systematically, Sega set about burning each and every quality series to ruin. Super Monkey Ball Adventure was dire, and missed the entire point of what made the series enjoyable. Iteration after iteration of the Phantasy Star Online series turned to mush with C.A.R.D. Revolution – although I never liked PSO anyway, as in my mind it’s not worthy of  a place in, or relevant to, the Phantasy Star canon. The “Shining” RPGs – once so great, now just meh. Virtua Fighter stopped being good after  the third game, and Sonic? Poor, poor Sonic.

By the time the Wii and Xbox 360 were around, Sega’s above-par output (both as a developer and a publisher) had dropped to almost nil. From useless racing shooter Full Auto to knackered MMO The Matrix Online. Some excellent old Sega games were revived, but invariably all they served to do was sour the memories – Samba de Amigo, NiGHTS and yet more monstrous abominations of the Sonic series (not least the 2006 “reboot” simply called “Sonic the Hedgehog”).

It is quite telling that my favourite Sega games of the last 5 years have been Wii Virtual Console, XBLA, and onna-disc compilation re-releases of Megadrive games. Those new games I’ve enjoyed can be counted on a single hand; House of the Dead: Overkill, MadWorld and The Conduit are three, but none of those actually had any real Sega involvement.

But let’s get back to Sonic. Of all the Sega properties, he’s the poor sod who has been bum-raped into irrelevance the most. He’s dead Sega. Leave his twitching corpse alone!

There’s a Thing On Teh Tinternets(TM) called “The Sonic Cycle”. This, in fact: 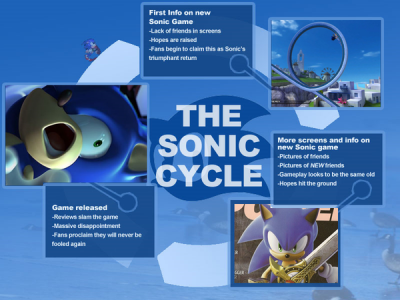 Each and every console Sonic game since Sonic Heroes has followed this cycle. Thankfully, handheld Sonic titles have been less awful, although the PSP’s Sonic Rivals games are not exactly stellar, and although fun, Sonic Rush and Sonic Rush Adventure on the DS still don’t compare well with earlier titles.

With every new game, Sega insist they’re “listening to the fans”. They’re “fixing $previous_game’s faults”. Yet somehow, they end up making them worse. What we really want, Sega, is no more “extra powers”. No more “friends”. No more gimmicks, weapons, “alternate universes” (hello Sonic and the Black Knight and Sonic Rush Adventure!). We want a nice, ideally 2D, happy Blue Skies Sonic platformer with TV screens containing rings, lives and shields, a boss at the end of every world, and absolutely NO MORE FURRIES.

Earlier this year, it looked like Sega had finally decided to do this. They announced Sonic 4. It looked exactly like what everyone had been after for almost 10 years – a proper 2D sequel, with pretty graphics and platforming fun. And no furries! Then the videos were leaked, and the true horror was revealed: it was broken. On the surface, it looked like Sonic, but the movement and physics were all wrong. There was a mine cart level where you tilt the level around and it was horrible. And for reasons that make no sense at all, Sonic had a homing attack. Yes, he did in Sonic Adventure, but that was 3D and jumping on baddies’ heads would be tricky without it. Here, it is totally unnecessary and drives a wedge between “what Sonic should be” and “what Sonic 4 is”.

That’s not all. They then went on to announce Sonic Colours for the Wii, which introduces more “friends”. More recently, they previewed Sonic Free Riders – a new game in the broken Sonic Riders snowboard racing game series, which not only retains the rubbishness, but manages to add even more by making it impossible to control with the Xbox 360 Kinect device.

Last week, Sega re-released the original Sonic Adventure for Xbox Live Arcade. An excellent move, you’d have thought, since Sonic Adventure was one of the last great Sonic games. And yes, it is still great on XBLA. However, they still managed to bodge the release by porting the shonky PC version over, complete with jerky animation and feeble draw-distance, rather than the original (and superior) Dreamcast version, or even the Gamecube re-release. Similar shenanigans seem to be the case with Crazy Taxi (also on XBLA). Even when they get it right, they’re still getting it wrong.

Back in 2003, following the commercial death of the Dreamcast, Sega were financially wrecked. A buyout by Sammy injected a bit of cash, and since then they’ve returned to reasonable sales success. At the time, we all had a collective sigh of relief that our lovely Sega weren’t going to die, and Good Things were to come.

They didn’t. The quality of the games dropped. Old favourites were sullied. Sonic became the company’s whipping boy, and my respect and love for Sega have become sadness and anger. I now wish Sammy hadn’t bailed them out, and they could have died on a high. Then I could remember them for the good games, the great times, and the fun.

10 thoughts on “Why Sega should just give up and die”