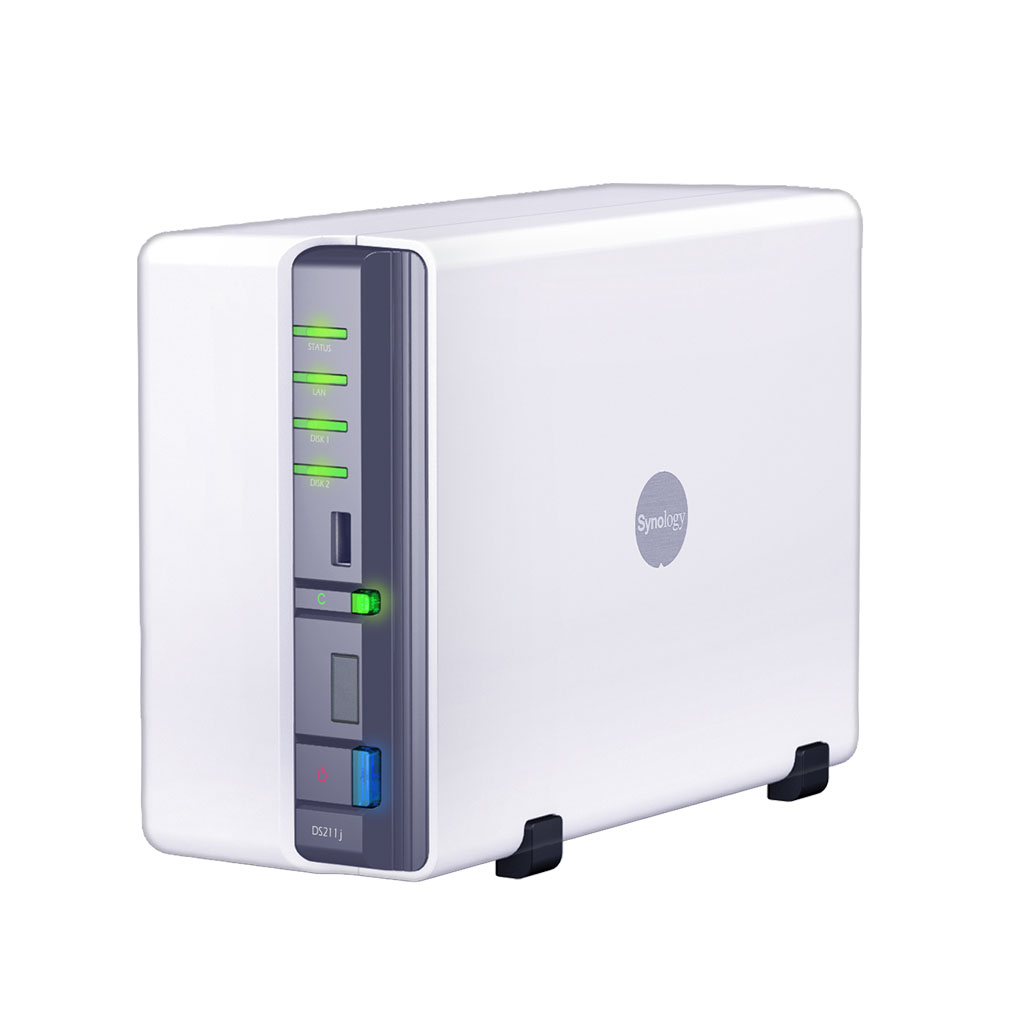 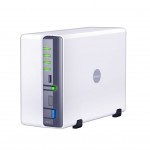 Being the paranoid about backups person that I am, I’ve been looking for ages for a way of backing up my Mac to a device in my loft. For a while now I’ve been weighing up the various pros and cons of assorted NAS devices, and a month or so ago finally settled on the Synology DS211j. It came top, or near-top, in virtually every NAS review roundup I could find (at least all those in the £200-ish price range anyway), and seemed to do everything I wanted and more.

Of course, then I came to order it and the only places online that had it in stock wanted a billion pounds (well, £300) for it. Bah.

On Monday I needed to buy a new external hard drive for my Wii (an exciting story for another time) and, when I went on eBuyer’s website, they had the DS211j not only back in stock, but also for £129 – almost £100 cheaper than it’s RRP when I was looking previously.

So, after my wallet was molested to the cost of the Wii drive, a DS211j and two 2TB hard drives to fit inside, my NAS was on it’s way.

I’ve had it a few days now, and love it. It was stupidly easy to set up (put drives in, attach to network, turn on, run setup app on CD, done), and everything past that point can be controlled through a web browser. Not that you’d know it was a browser – it feels more like a remote desktop session! 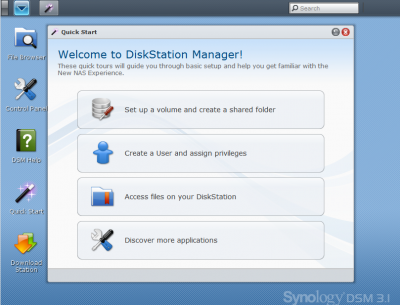 This is the welcome screen that comes up when you log in through your browser. The little down-arrow in the top left is like a Windows Start button and there’s a control panel and (context sensitive and very useful) help button on the “desktop” and almost every app window.  You can even make your desktop “persist” between logons, which is useful. 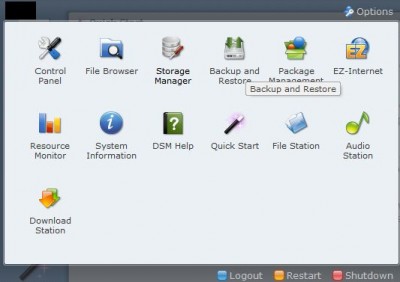 These are some of the apps that come with the NAS, and there are a few more available from Synology’s site and elsewhere (as well as a few others built in that aren’t activated by default). The Audio Station is a full music player that streams any audio files on your NAS through a nifty player – no client software required! The file browser lets you up and download files through the browser, and File Station lets you access chosen files and folders without the need to log into the full NAS system.  WebDAV is also supported, as is FTP. 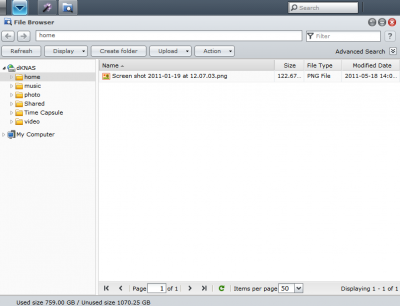 Another great feature is Download Station. It’s a full Bittorrent/NZB/eMule/RSS/HTTP download client. It’s great for setting stuff off to download without it tying up you main computer, meaning you don’t need to leave a computer on overnight to get those huge files. It has all the speed throttling, scheduling and priority settings you’d expect with a “normal” downloader too, and will email you when downloads complete (or fail). 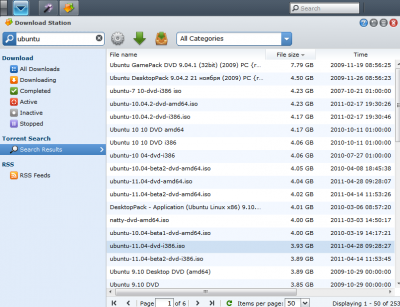 Other things it can do include updating your DDNS settings with your DDNS provider (such as dyndns or no-ip – something I really needed since the no-ip client is flaky under Snow Leopard), running a webserver (including php and mysql support), Time Capsule support (my main reason for needing it!) and serving photos.

Of course, it also acts as a file (and print) server, and even does one-touch backup for USB devices when you plug them into it. Pretty impressive, yes?

It doesn’t stop there. It’ll also backup to other devices, can have it’s storage increased by adding a USB drive, and supports RAID and multiple partions. It can even beep at you when it’s broken, or something has finished downloading. And act as a mail server. And you can administrate it via SSH if you’re a command line pervert.

But that’s just what comes out of the box!  As an iPhone owner, I was impressed to see there’s a set of complimentary (and free) Synology apps for it. 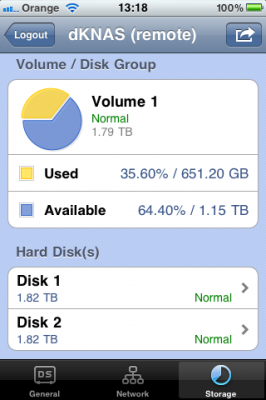 DS Finder (above) shows some stats about any Synology NAS devices it finds or your LAN (or configured over the internet). It will display drive usage, connection details, running temperature, and so on, and you can also make it beep and flash remotely so you can locate it in a sea of other devices if necessary. You can also remotely shut down or restart your NAS with it.

Useful, but not exciting. This, however, is a bit more interesting: 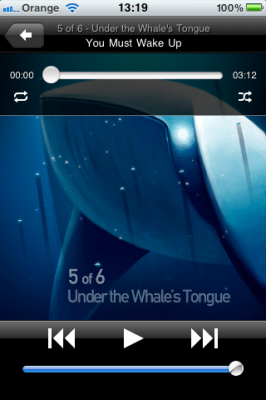 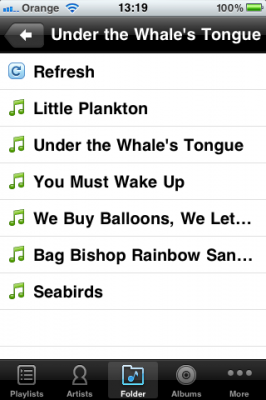 It’s DS Audio – an app that streams all the audio files from your NAS to your iOS device. Even over the internet. And it supports playlists and shuffle and artwork and runs in the background and everything. Lovely!

There’s also a nice front-end app for File Station, and another for your photos. In fact, the main Synology DSM website works quite happily in Safari on the iPhone anyway, but these apps just make the experience a bit more pleasant.

In terms of its operation, the DS211j is quite quiet, although heavy disk activity does increase the noise, as I found out when doing my first Time Machine backup to it. I think much of the sound is from the drives, rather than the fan, though. It runs cool too (again, this might be mainly due to the types of drives I put in it), being barely warm to the touch even after a solid 12 hours backing up.

DSM software updates are done directly on the device through the web interface, and can be set to download and install automatically if necessary. Extra software modules can be installed through this interface too.

Is that everything? Pretty much everything I’ve poked at so far, anyway. Except one thing – did I mention it’s also multi-user? Yes – you can set up multiple users and it even appears to be possible to authenticate with LDAP and other user databases. What users can access can be easily fine-tuned too, meaning you could, in fact, use the NAS as your network server if need be. Amazing!

Overall, I’m very impressed. It’s well made, has a slick, configurable interface, has millions of great features and functions, and works. I’d recommend it to anyone looking for a cheap and flexible NAS.

EDIT: Oh yes – one more thing! You can also share your media on the NAS via the iTunes protocol, meaning your NAS music shows up in iTunes as a shared library!

EDIT 2: And another! (It just keeps giving!) The DS211j can also serve media to other media clients. For example, your Xbox 360 or PS3 (or any other DNLA supported device) can stream media directly from the NAS. Useful, I’m sure you agree.