One and eight, I’LL KNIFE YA! 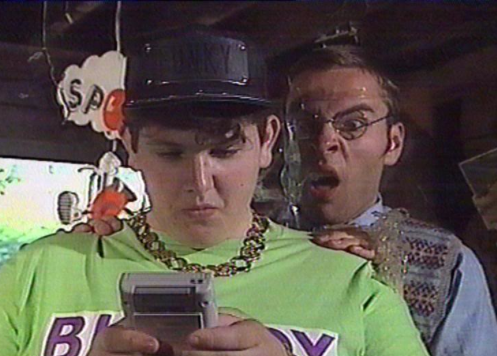 In the mid 1990s Sky television in the United Kingdom broadcast a “television programme” called Games World. It was a poor relative of the obviously superior Gamesmaster, but did have the advantage of a low audience share due to being available only on the satellite channel. These rock bottom viewing figures ended the show’s run well short of Gamesmaster, although the demon bosses at Sky reran Games World so frequently in the subsequent years that 95 percent of the channel’s output for the whole of 1998 consisted of The Simpsons and Games World, with the remaining 5 percent being The Simpsons special episode of Games World.

One of the recurring sections of Games World was presented by “games expert” and “professional food eater” Big Boy Barry. His play tips and banter enthralled and entertained all six of the show’s viewers, none of whom were actually old enough to own a Sega Mega Drive so couldn’t even make use of his hints on beating Dr Doom on level seven of Sonic the Hedgehog.

Barry (real name Barrymondo) was the closest thing Sky had to a celebrity, so they decided to make use of his likeness in increasingly confused and unsuccessful ways. At first, they simply used him in print adverts in Saga Magazine and Your Stepladder Monthly, pimping their The Simpsons exclusivity. Then they moved into merchandise, with Big Boy Barry brand baked beans, lighter fluid and flypaper.

Barry tried to distance himself from Sky, stating that with the cancelling of the Games World TV show, they no longer owned neither him nor his likeness. His lawyers prepared to sue the Emperor Of Sky Television, but Sky produced a contract signed by Barry’s birth parents stating they willingly sold Barry, Barry’s likeness, Barry’s milk teeth, Barry’s soul and all of Barry’s future offspring to Sky Television for the sum of five magic beans. Sky’s Barry-fuelled media onslaught carried on unchallenged.

Some badly directed TV adverts featuring Barry in compromising sexual situations with assorted hand puppets were mistakenly broadcast during CITV’s Children’s Ward rather than after 10pm on Channel 4 before ER, and Sky decided it best to shelve Barry as an asset. His personal life suffered and he hit the bottle hard, spending his dirty Sky money on case after case of Moet.

Until 2003 when they decided to reboot Big Boy Barry as a grown-up. A new series of Games World was commissioned, and filming began on the new, more adult, video game show. Sex and violence were to feature more heavily, and Vinnie Jones was to present a strand each week showcasing real life knife fighters playing Street Fighter II and Barbie Horse Adventures. Taking their cue from Gamesmaster (again), it was decided a humourous location for the show was a good idea, and so a deal was struck with Mecca Bingo to film the studio segments in one of their swankiest bingo halls.

Then one of the producers had a brainwave: why not create an actual video game, about the All New Mecca Bingo Games World Show, to go with the series? Veteran crap game developers Titus were approached to program something that fitted in with Barry, the new adult direction the show was moving in, knife fighting, and Mecca Bingo. “Big Boy Barry Bubbly Binge Bingo Bloodbath” was born.

Released for the Nintendo Gamecube just days before the new series was due to air, the title immediately caused controversy. Barry was portrayed as a drunken oaf, swilling champagne and threatening little old ladies with shouts of “One and eight, I’LL KNIFE YA!” and “Two fat ladies GETTIN’ KNIFED!”. This was neither in keeping with Nintendo’s usual family friendly output, nor the game Sky expected from Titus. Somehow, not a single person at Sky had even seen the game in any form before it was on the shelves, and the bad publicity caused outrage amongst the armchair Daily Mail readership. Sky had no choice but to not only recall the game, but cancel the show – replacing it with more episodes of The Simpsons.

Very few copies of the game still exist in the wild, but rumour has it Titus sold the game engine and assets to Rockstar Games, who repurposed it as the more media-friendly Manhunt.

With apologies to the Real Real Big Boy Barry.