The S key is right next to the IT key on Japanese keyboards. 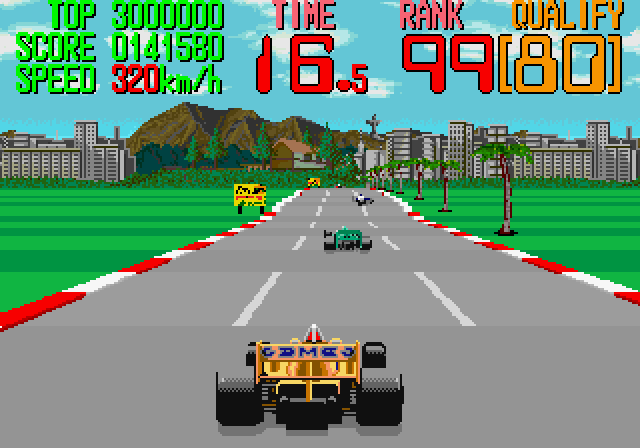 It is well known that in the late 1980s the Japanese game company Taito made a slight error with one of their titles, releasing an F1 racer called “Continental Circus” after a poor translation of “Continental Circuit”. It was an easy mistake to make, I mean, the S key is right next to the IT key on Japanese keyboards.

Taito (back then, known as Potaito) had developed what they thought was bound to be the next big thing in gaming – two player head-to-head motor racing with bladder control. Literally. A pair of huge arcade cabinets, each housing a large screen, a reclining chair, a steering wheel, foot pedals, and a number of straps and sensors that needed to be attached to the player. A drinking fountain was angled towards the player’s mouth, and after inserting a few 100 Yen coins, the game began.

Much like in most other motor racing games, the aim was to win the race, but the twist with Incontinental Circuit was that your car’s engine power increased as you, the player, physically filled their bladder. The more you drank, the higher your vehicle’s top speed. Don’t drink, and your car loses power. The first to pass the Chequered Flag was the winner, the first to pass urine was disqualified. That’s right – moisture sensors in the seat would alert the game to your embarrassing release.

Unfortunately for Potaito, they were hit from all sides with issues. The main one that hit the headlines was over gamers sitting in a pool of other peoples’ fluids as arcade staff failed to mop up after disqualifications, and all the associated health risks that came with it. This was the 1980s, remember, and popular myth at the time was how easy it was to contract AIDS from arcade machines. Other problems just made things worse. The water fountains needed to be connected to a water supply, which was something most arcades struggled to accommodate. All that water (and “previously drunk” water) in close proximity to electricity caused several shocking deaths, and one unfortunate individual managed to drown when his water fountain malfunctioned and he couldn’t get out of the seat straps quickly enough.

What really killed the game off, however, was the cheating. Players soon found that by wearing adult nappies, they could thwart the sensors and wet themselves all they liked without the game noticing.

With the game an expensive flop (all those proprietary and unusual components almost bankrupted Potaito before the cabinets even hit the arcades), Potaito gutted the core game and repurposed it as a more standard F1 racing game. No water, drinking or sensors. They called it Continental Circuit, but somehow the same translator made the same mistake again. He never found translating work after that, and the entire fiasco was blamed on him and him alone.