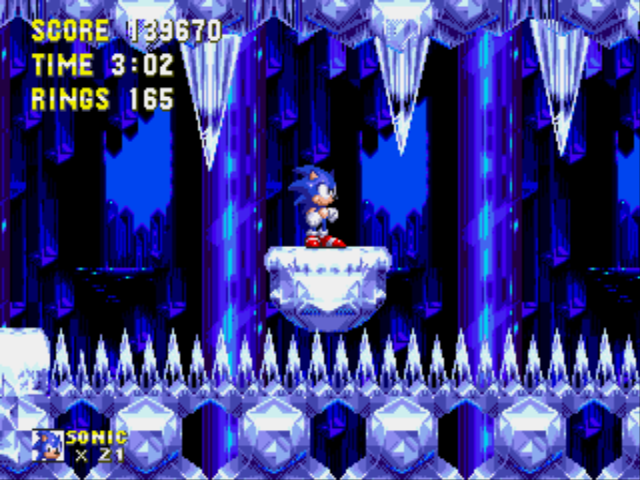 Ah, S. The letter that provides all those Super games, like Super Tennis and Super Star Wars and Super James Pond and… oh, wait – that’s the Super NES.

Mind you, the Mega Drive has a fair few Supers, but naturally most of them are not very super. A quick list of nopes to start us off then.

Super Hang-On and Super Thunder Blade are poor approximations of the arcade games. Actually, Super Hang-On isn’t that bad a conversion, aside from the usual sprite scaling issues that mar these sorts of games, but it’s always been pretty dull. Super Baseball 2020 is a futuristic baseball game ported from the Neo Geo and isn’t very good, and Superman (yes, that’s cheating a bit) is – like pretty much all Superman games 1 – is awful. Super Kick Off? You know the rule: it isn’t Sensible Soccer, so no (and although not “Super”, Striker goes here too).

Thankfully, there are some decent Supers, with Super Off Road and Super Skidmarks both similar but great Super Sprint-style racing games. Super Fantasy Zone is a lovely shooter in the Defender style, sort of, and Super Smash TV is a fun twin-stick shooter slightly broken by the lack of a second stick – the SNES version works better. Super Monaco GP is another coin-op conversion, and is better than Super Hang-On but still isn’t going to make the shortlist.

With those all discounted, what else can go? Steel Talons is an overly ambitious LHX Attack Chopper style 3D helicopter game, which is more arcadey than that title but still suffers from the Mega Drive’s lack of polygon grunt. Street Racer cleverly simulates the Mode 7 style tricks of Super Mario Kart, but utterly fails to create a decent kart racer to match. Skitchin’ is Road Rash on skates (and not as good), the pair of Simpsons games are not great platformers, Sparkster is a superb game but not as good as Rocket Knight Adventures, which it’s the sequel to, and although none of the many Spider-Man games are terrible, they’re not exactly the best S has to offer. Sadly, the Star Trek games fare even less well. Sub-Terrania (technically quite incredible Thrust spiritual update) and Sunset Riders (arcade conversion) are both decent, but only the best count here.

On the list of average-or-lower platformers, Spot Goes to Hollywood (the original Cool Spot was actually pretty good though), Spirou, Strider II (another poor sequel), and Stormlord, which never seemed as good as the home computer versions for some reason.

Good games that I can thoroughly recommend, even if they don’t make the final three, include Syndicate, a great cyberpunk tactical strategy game from the makers of Populous, Strider (the original) which is looking tired these days but is still a solid title, Steel Empire, a scrolling shooter which has recently been remade for the Nintendo 3DS, and Splatterhouse 2 and 3 which are worth it for the ridiculous amount of gore if nothing else.

Phew, eh? That’s most of the games dealt with, so which made it through unscathed? 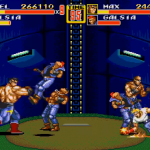 Streets of Rage 2 is here representing the series as a whole, but is the one that I deem the best of the three. They’re all awesome scrolling beat-em-ups in the Final Fight mould, but Streets of Rage 2 is the peak with more moves, better graphics and bigger than the first game. Streets of Rage 3 just fails to meet the high bar of the second game with new character Zan being rubbish, hard to obtain branching endings, and music than can’t match the other two games. 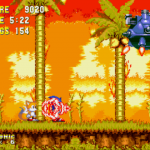 Sonic the Hedgehog 3 similarly represents that series. Spinball is OK but jerky and a bit random, but Sonic, Sonic 2 and Sonic & Knuckles are all deservedly classics. Sonic 3 & Knuckles combined is – in my opinion – the best the Mega Drive has to offer of any letter or genre, but it’s not quite a single game and the levels of Sonic 3 are better than those of “& Knuckles”. Some would say Sonic 2 is superior and I can understand why, but 3 is my choice here and I’m correct. 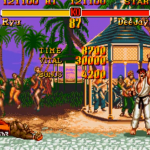 Super Street Fighter II replaces also-S Street Fighter II Special Champion Edition by mainly being the same game only with more characters, backgrounds, moves and tweaks. It’s the very best one-on-one fighting game for the Mega Drive that isn’t Ultimate Mortal Kombat 3 (yes, I did just say that), and don’t let those SNES owners tell you their version is better because it isn’t.

That was one hell of a lot of games to wade through, wasn’t it? What was surprising was how many of them were actually good games too, as before I looked into it I was expecting a real pit of dross. Of the final three there can only be one overall winner, and that is definitely Sonic the Hedgehog 3. Perhaps an obvious choice from the outset, and maybe controversial given the popular choice might be Sonic 2, but it does so many things better than that game – the Michael Jackson inspired/composed (who knows?!) music, the much improved sprites and level detail, the electricity shield… it can’t not win. Unless Sonic 3 & Knuckles was allowed of course. Which it could have been as it’s my rules. Hmm.

Hopefully the next letter tackled won’t have as many games to work my way through. Let’s have a look… oh. It’s T. Crap. Whose idea was this stupid thing anyway?