“I reckon I’ll stay in this evening, I’ve got a feeling something’s going to happen!” 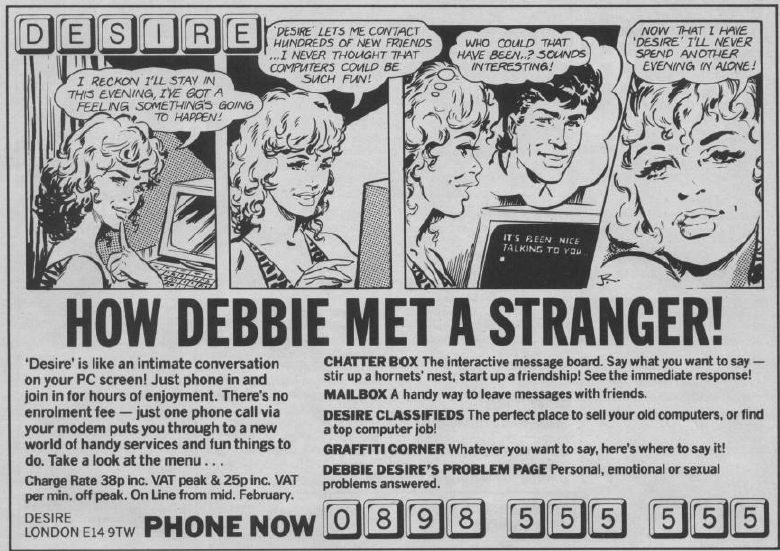 Like we’re supposed to believe that the lovely Debbie is 1) really into computers, 2) owns a modem, and 3) is actually a woman.

In the early 90s, bulletin board systems like this didn’t have women on them, and anyone who appeared to be a woman was almost always a man. It’s not being sexist, that’s just how it was. Geeky men with thick rimmed glasses and facial bumfluff but enough money to dial these incredibly expensive phone numbers for hours at a time.

I wasn’t one of them, of course, because I didn’t wear glasses and had nowhere near enough money. I did, for a time in around 1993-4 have a modem for my Spectrum and again briefly in 1995 had one for my Amiga 500. I can’t recall what I dialled for the former, and the latter was a board called Digisomething. Digidrive? I’ve no idea.

Digiwhatever gave me my first personal email address (I’d used email at school years before, but never had my own email account) which I never used, and had the usual at the time set of message boards, chatrooms (which were always empty), text files full of jokes and hacking guides and stuff, download areas (to get Amiga public domain software and no doubt some viruses as a bonus) and games you could play within the system. One was Hunt the Wumpus, another was a sort of MUD you could create rooms in as you go. It was incredible at the time. To get an idea of some of the stuff that got put on these things to look at, you can find some are archived here.

A year or so later I had free internet access at university and joined a telnet BBS called Room 101. It was “run” by some geeks at the University of Ripon (which isn’t where I went), but in reality was probably loaded onto a computer sat in a cupboard somewhere and the staff didn’t know about it. It was almost certainly accidentally turned off in around 2001 and since nobody knew it was even there, was never turned back on.

Like Digiwhojilly, it had games and chat rooms and things, but because it was more widely used, mainly by students across the country, it was much busier. It was fun while it lasted, and didn’t come with a massive phone bill.

Amazingly, there was one actual real actual genuine girl on there, called Justine. I know she was a girl because I rang her twice while drunk. The second time I called she was out and I spoke to her mum at 2am. It was awkward. “So how do you know Justine?” “We spoke on a computer, er, thingie.” “And why are you calling at 2am?” “I’m drunk”.

That’s how Debbie met a stranger. No, I’m not Debbie – Justine is.

More amazingly, considering the internet is a global thing, and Room 101 was at the very least UK-wide (although I do remember at least one American on there), I was in a computer room at three in the morning or some other ungodly hour chatting on Room 101. Slowly it dawned on me that the guy I was chatting to was sat behind me. Then I found out he lived in the same halls of residence as me in an adjacent corridor. What are the chances?

But really, Debbie in that advert? Advertising in nerdy computer magazines that bored women go on some online chatroom? In 1993? No way.

ADDENDUM: It was DigiBank! Also known as Digital Databank, and closed in 1998. Turns out it was a mainly Acorn BBS, but they definitely did Amiga stuff.

2 thoughts on “How Debbie Met a Stranger”