Or MBison+ as we know him over here. 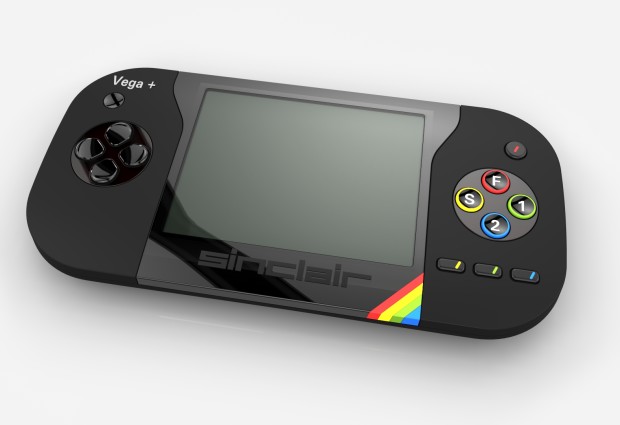 The sorry story of delays, legal wranglings, complaints and more delays regarding the ZXVega+ has begun to appear in mainstream media in the last couple of weeks. No longer just nerds arguing in forums and people shouting into the black hole of Twitter, even the BBC have reported on it (even if they did have to remove the article due to legal threats).

I came into the story quite late. Almost as late as the ZXVega+ devs, it seems (ho ho!). I heard about the ZXVega+, a handheld computer reimagining of the ZX Spectrum home computer from the 80s, when it was first announced as an Indiegogo campaign. It followed the ZXVega, a “computer in a controller”, which was also crowdfunded and successfully released. This original device was not without its problems, and I never wanted one despite my love for the Speccy because of them. Mainly, no keyboard.

The ZXVega+, initially at least, looked more interesting. A sleek handheld with a screen this time, and the ability to plug a keyboard in. Still, £100 was a lot for something my Nintendo DS already did, but it was nice.

That was over a year ago, and… things have not gone well since. I won’t begin to understand all the details, who was lying, who was telling the truth and what was and wasn’t promised, but the situation now is a shambles.

RCL, who are responsible for the device and the campaign, keep announcing delay after delay. Partners in the company have changed. There have been production issues. The rights to some of the 1000 games lined up for the ZXVega+ have been denied.

Their campaign promises refunds if backers are not happy, and boy are some backers not happy. Very few people who have requested refunds appear to have received them too. Why are people wanting refunds? Because RCL have very little to show for over half a million pounds worth of funding, and because they’ve not been successfully updating backers with progress.

In the last couple of weeks, they’ve finally managed to take some photos of the devices, and even edit together a couple of videos of them supposedly in action. I say supposedly, because as some people have pointed out, the videos appear to be just showing videos running – not the actual games or user interface. Key presses don’t correspond with on-screen action, and both videos show the same content albeit edited differently. Make your own mind up:

Then there’s the fact at no point, ever it would seem, have they managed to show more than three devices working at the same time. Some comments on the Indiegogo page suggest that they’ve only got three working prototypes.

Now there’s suggestions that the “group shot” published a little while back shows cardboard boxes that are actually hand-modified versions of the original ZXVega box.

What RCL need is transparency. They have nothing to lose, and everything to gain, by just telling everyone what’s actually going on. Stop threatening everyone with legal action. Actually show pictures of what you have. If there are delays, that can be tangibly explained away, most people will accept that.

“We don’t have any boxes so we mocked some up” – this is fine.
Boxes shoddily modified – this is not.

“We only have three working prototypes” – this is fine.
“Look at all these ZXVega+s! Oh but only three are ever turned on” – this is not.

“Everything is delayed. It might be months. We’re working hard. It’s harder than we thought. Here’s what we’ve done so far and here’s what we’re doing to make it happen” – this is fine.
“Stop complaining about us. We’ll get our lawyers onto you!” – this is not.

RCL are spending their time getting riled up about what people are saying and not getting on with it. If they want people back on side, they need to be open. Come clean. Explain who at the company actually does what and – much as I hate to single him out – explain exactly what Lee Fogarty’s role is. For someone who supposedly “just does their website”, he seems to know an awful lot more than that position would suggest. Show the people some proper proof – not shakey-hand iPhone videos (that were delayed so they could be “Hollywood quality” – they’re clearly not), or explain why you can’t. Be humble, be clear, be open.

On the other side, the angry backers (who have every right to be angry, sure) need to simmer down a bit. There have been some very nasty, personal and slanderous things from that corner and it’s not helping. All you’re doing, guys, is giving RCL more excuses to delay things and spend your money.

As for my question at the start: Will we ever see the ZXVega+? I hope so. I really do. I don’t think I’d buy one, but I want the project to succeed because of what it represents and what it may inspire in the future. Unfortunately at this point, even if they’re not (and I’d like to think they’re just naïve), they’re coming across as shysters.

My gut feeling at this point is, perhaps a year from now, a device called the ZXVega+ which resembles what we’re expecting but isn’t quite there, finally comes out. Not as polished. Not as slick. Missing features or altered specs. But something. And I don’t think anyone will be pleased.