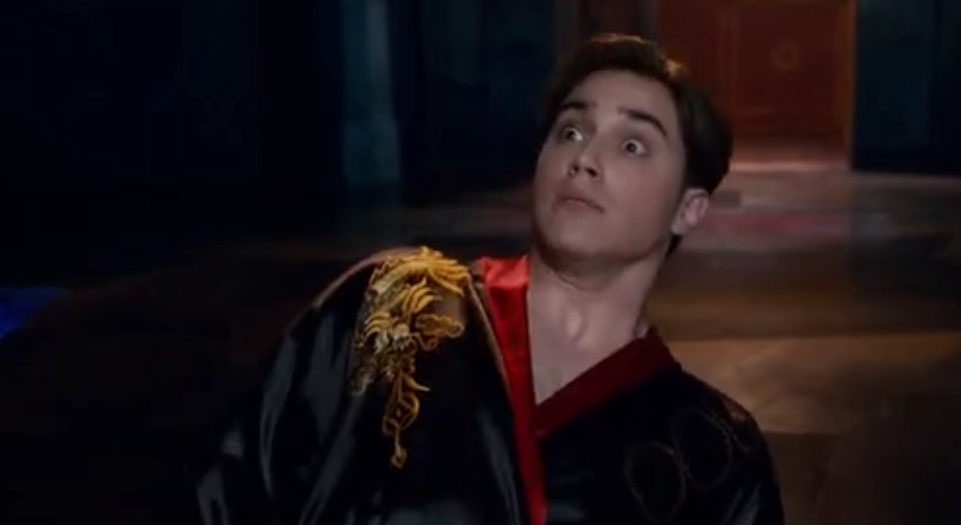 I went into watching this new version of Richard O’Brien’s iconic musical with trepidation. As a massive fan of the original, I was worried this 2016 remake was going to taint my love of Rocky Horror, not least because most of the reviews I’d read really slated it. I’ll admit, I went in expecting the worst.

From a cold viewpoint, Fox’s 2016 take is the same film as the one from 1975. The plot, the setting, the songs, and even almost all of the dialogue are virtually identical. It’s set in the same time period, and the same events occur, but there is one main difference: There’s an on-screen audience who do some of the now traditional dialogue participation, usually performed by a real audience.

Of course it isn’t quite the same. It’s a whole new cast, for starters, and it’s this cast that causes the biggest issue with the production. Now, much as I like the original film, and its cast, I’m not precious about it. I understand it’s a theatre musical as well as a film, and it’s only natural that over time many different people will fill the various roles. Who, specifically, have done so here is genuinely rather hit and miss. 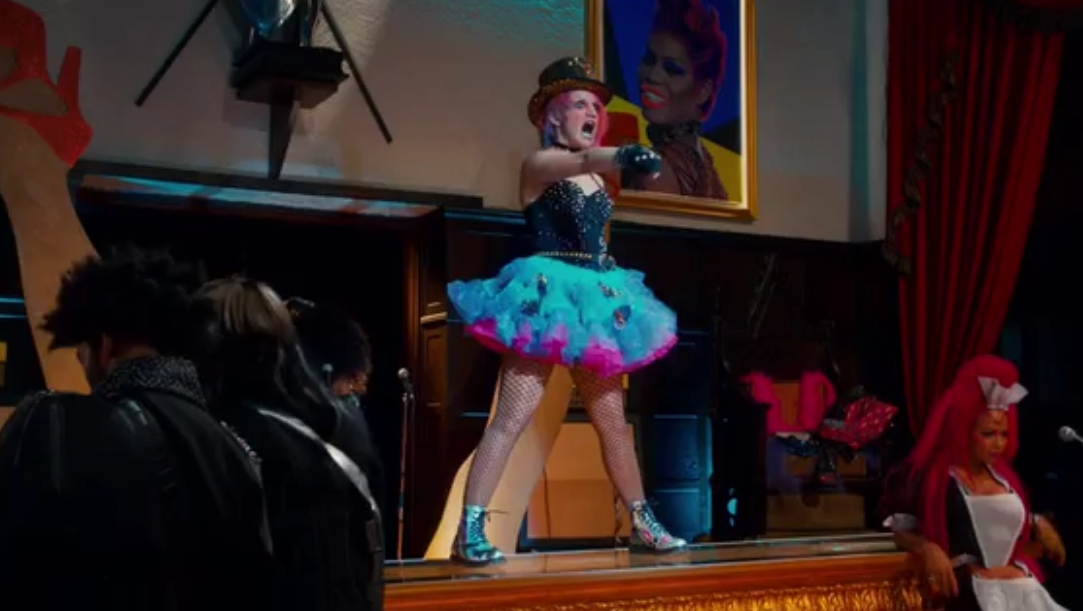 To start with credit where it is due, Laverne Cox is excellent as Frank-n-Furter, both in style and voice. She’s a genuinely different take on Tim Curry’s Frank, and it works. Victoria Justice is a great Janet, and Ryan McCartan plays a bland Brad badly, although that’s keeping in character with the original role. Adam Lambert surprised by not trying to replicate Meatloaf’s Eddie, instead having more energy and making it his own, but Reeve Carney virtually channels Richard O’Brien’s Riff-Raff to the point where you wonder why they didn’t just hire O’Brien again. I’m torn on whether this makes Carney’s Riff-Raff good or bad. Columbia, played by Annaleigh Ashford, is almost Harley Quinn, but it works and she’s possibly even better than Nell Campbell. Possibly.

Less impressive are the others. Christina Milian is a totally forgettable Magenta, Ben Vereen makes a terrible Dr. Scott (a role performed almost as if they wanted Morgan Freeman instead), and – probably due, sadly, to his stroke – Tim Curry really doesn’t make a good Criminologist. Curry’s delivery just isn’t there. The worst, by a long way, is Staz Nair as Rocky. Sure, Rocky is meant to be an airhead with a body builder’s physique, but he walks like a robot and isn’t exactly stacked in the muscle department to make up for it. He’s a very strange choice, and his entrance song – Sword of Damocles – is a dire rendition here.

Moving onto the Rocky Horror music, it’s generally great. A few songs are arranged differently, which changes the feel a little, but they’re mostly still wonderful. Rose Tint My World may perhaps surpass the original, and Dammit, Janet, Touch-A, Touch-A, Touch Me and Wild and Untamed Thing are all at least as good. Sadly, the best known and most loved track in the musical, The Time Warp (after which this remake takes its subtitle), sounds much less fun and the dancing isn’t anywhere near as tight as it should be. Come on, Fox! That’s the most important bit!

Despite the bad points, and really there aren’t that many, I’m relieved. My memory has not been tarnished, and although The Rocky Horror Picture Show: Let’s Do The Time Warp Again is far from perfect it’s perfectly watchable, enjoyable, and if it brings the show to a new audience with its sexy young talent (and Staz Nair), then that can’t be a bad thing. I’ll stick with the 1975 classic, but I’ll happily see this on the side every now and again.

This review was originally published on Disposable Media. 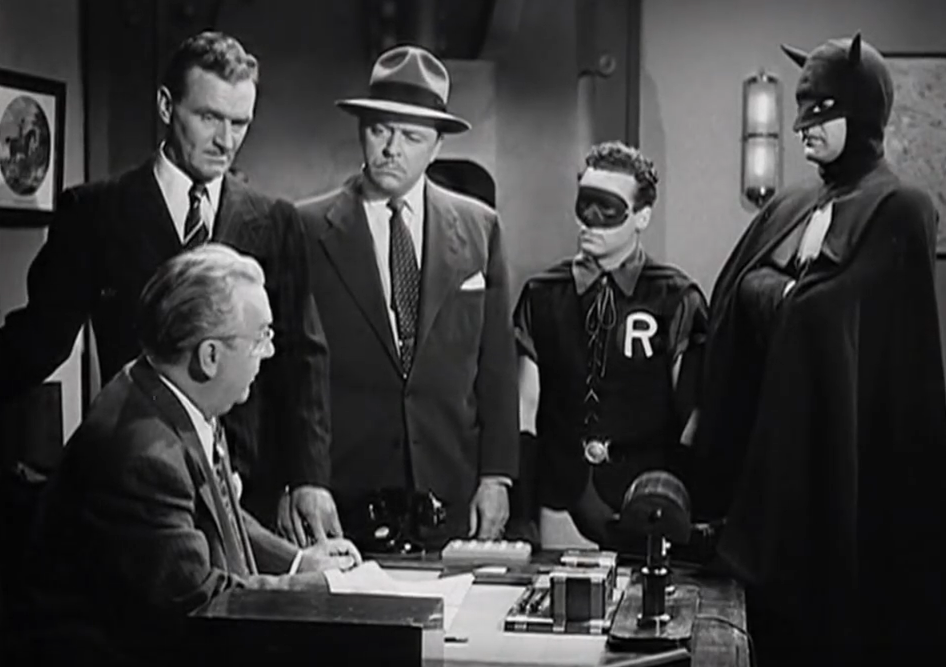 (This suggestion from @JayTay. At least it isn’t jam, I suppose)

the masterpiece of cinema that is Batman and Robin

It is hard to tell if he is being sarcastic or not, and not only because I’m surprised he’d ever even seen it. I know, up until this request, I certainly hadn’t.

Like many films of the era, compared to modern ones at least, the acting is school-play level terrible, the costumes and props are laughable and it’s far too long. Whole sections where nothing happens, such as a car driving down a street, or a guy sat at a desk doing zero of interest or relevance to the story should have been cut completely.

The dialogue is vapid and the characters completely characterless. Bruce Wayne appears to be a generic salaryman in a wide-shouldered suit, while Batman is uncomfortable and podgy in a badly fitted costume. Robin looks concerned with his high-hipped pants (and dresses like he’s in Showaddywaddy when in civvies), and Wayne Manor is, on the outside at least, simply a large house. Hardly a mansion befitting a billionaire playboy.

Alfred is psychic, knowing to walk to the phone before it starts ringing, and to go to the window and look at the Bat Signal without actually knowing it is there to look at. Said signal is somehow projected via a microfiche viewer too. Totally unbelievable. Vikki Vale looks old enough to be Bruce’s mum, and the undynamic duo drive a normal car, albeit a convertable.

The plot revolves around Batman and Robin trying to stop The Wizard (no, not Fred Savage’s little brother) who can control cars with some electrical gizmo and turn himself invisible, but most of the film consists of Batman or Robin getting trapped and needing the help of the other to escape. It’s a shambles, a farce, and utterly devoid of any entertainment value at all. Oh, and get this: it has a an ending that wouldn’t be out of place in an episode of Scooby Doo. Spoilers, I suppose.

Masterpiece? I don’t think so. It has very few Bat-Gadgets, no proper Batmobile, and the fighting is atrocious. It’s more like a cross between a Famous Five book and a western than a Batman film.

I give it two stars. And that’s only because of Robin’s pants.

How to comment on this film without mentioning Days of Thunder? Answer: I can’t.

In fact, not only is Days of Thunder mentioned in the film, but the entire plot seems to have been borrowed. Sort of. I’ve not actually seen Days of Thunder for years, but there was more than a bit of deja vu watching Talladega Nights.

As a comedy, though, Talladega Nights does things for laughs. And thankfully, it is funny. Not amazingly so, but it still raised a grin more than a few times – a few because of Days of Thunder, actually. Will Ferrell plays the same character he does in almost every film he’s in (in a NASCAR suit this time), and Sasha Baron Cohen plays a totally unconvincing French F1 driver who has taken up NASCAR because he masochistically wants to be beaten by someone better than him.

Along the way, Ricky Bobby (Ferrell) goes from top of the game, to losing everything – his wife, the race, and the plot – before being coaxed back into the driver’s seat by his newly returned alcoholic absent father, who re-trains him Yoda style. Or like he did in Dodgeball. Again.

Funny, but nothing special.

Just a catch-up and verdict on a couple of films I’ve seen recently:

My Super Ex-Girlfriend (2006)
Silly, but funny, film about a socially awkward superhero who falls for someone who helps her out, only to become ridiculously jealous of his co-worker. Eddie Izzard is the best character, as always.
Verdict: 3/5

The Truman Show (1998)
Remember when Jim Carrey used to be good? Ideally cast here as a star of his own Big Brother type TV show, only he doesn’t know it. Until he twigs. Totally unbelievable, but good nonetheless.
Verdict 4/5

It was never meant to be a serious contender for any sort of awards. Samuel L Jackson pretty much only took part “for the lulz”. Even the name is stupid. But the film?

But watchable, for some reason. Nobody in it can act. The special effects are simply “special” (the green snake’s POV? Rubbish), and the plot doesn’t make any sense. There are holes all over the place, such as needing to know which snake bit who, but not actually knowing in most cases. The deaths are stupid – why would snakes only go for the eyes and genitals? Unless they only wanted to wound, in which case they go for the arm.

Somehow though, I enjoyed it. Perhaps that’s all they aimed at when making it.

I’ve watched a lot of films recently, but haven’t had a chance to write anything here about them because, well, some other thing has been taking up a lot of my time. So here’s a concise list!

Withnail and I (1987)
Two wannabe luvvies hop around drinks and drugs, seemingly to just fill in the time between acting auditions.
Verdict: 4/5

Ghostbusters (1984)
I always wondered what the point of Winston is in Ghostbusters. Watching it again didn’t enlighten me.
Verdict: 5/5

Pirates of the Caribbean: Dead Man’s Chest (2006)
Backstabbing and betrayal by and from just about everyone on board, with much silliness and swordfighting.
Verdict: 4/5

Superman Returns (2006)
I wish he hadn’t. Lex is great, but what happened to Lois? She’s become a wimp. And Superman has a son? Not possible, if you work out the dates. Too much cheese, not enough bacon.
Verdict: 1/5

Starter for 10 (2006)
Best Bamber Gascoigne look-alike ever. Funny film, with a couple of twists (one of which is obvious), but great anyway.
Verdict: 4/5

Blade Runner: The Final Cut (1982)
One of the best films ever made. Fact. This cut is one which implies Deckard might be a replicant, although I don’t think he is.
Verdict: 5/5

Lolita (1962)
Did they? Didn’t they? That’s an unanswered question. What’s clever is the twist at the end, which turns the entire plot upsidedown.
Verdict: 5/5

Since I was far too young to have seen such filth before, this was the first time I’d ever watched Porky’s. I was under the impression it was sort of like American Pie, only from the 80s.

There’s some nudity, but it’s pretty tame these days. I expect in 1982 there were complaints about it, however. The acting is a bit poor, the plot is nonsense, and there’s a shovelled-in-for-no-reason antisemite side story which doesn’t really work in a comedy (someone tell Woody Allen?). The rest of it is actually quite funny. Very funny, in places.

You know, even though I’d not seen this before, the number of take-off and parodies I’d seen in things like The Simpsons and Family Guy made it feel like it was a repeat. Of course, I didn’t really know the plot (and there were a few twists in it anyway), but I started thinking to myself – “this is the bit where…”.

Which I suppose is testament to it’s classic film status, really. There are a few jarring special effects (mainly the usual stuff from films of this age – pre-filmed scenery in driving shots, and so on), but the story stands up well, and it’s even pretty funny. Thornhill, the advertising exec who manages to be mistaken for a spy who doesn’t actually exist, comes out with some great one-liners. His method for getting himself arrested (and therefore out of harm’s way) at an auction was fantastic!

The number of situations and locations more than rivals any Bond film, and the spy-who-isn’t seemingly has a Magic Pocket of Money – something Q never managed. He goes on a whistle-stop tour of the US, pulling out cash for transport and tips, trying to track down the spy he’s supposed to be. Only of course, that can’t happen. He gets tangled up even further between the two factions, and even more so with Eve, who appears to be working for both sides, and for him. It all gets a bit complicated.

Then, when you think it’s all over and there’s a happy ending for all, there’s suddenly half an hour more film!