A few months ago, I posted a couple of rants about speed cameras, specifically the new average-speed cameras being installed on a stretch of dual carriageway on my way to work. Well, they’re in and the road has been extensively resurfaced and finally fully reopened.

Reopened to MORONS. And me, of course.

You see, they’re average-speed cameras. So there are two cameras, about two miles apart, and they calculate how long you’ve taken to travel that distance and so determine if you’ve been speeding or not. Except, people don’t seem to have grasped this concept. Every single day, I get cars slam their brakes on for the first camera, then power off to the next one where they stand on the brake pedal again. And get flashed for their trouble.

Another day, another delivery from eBuyer via City Link. These are a for-work delivery, though. And, oh! Look! It’s smashed up! 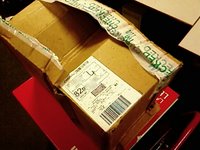 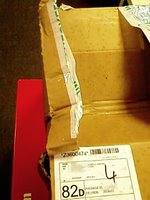 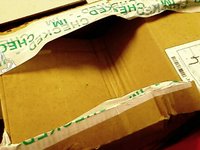 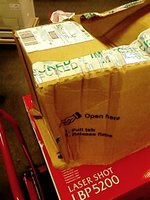 However, unlike last time, the boxes inside (some Seagate external hard drives) are also bent out of shape. Lets hope they’re actually working, eh? 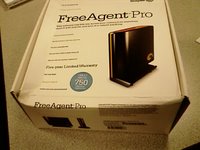 City Link is a well known courier company. Infamous, in fact, mainly because of how crap they are.

I order a fair amount of stuff over the internet, and have yet to deal with a courier company who isn’t crap, but of all of them City Link stands proud as the Worst of the Worst. I won’t go into the problems I’ve had with them in the past, but will say that I’ve had things incorrectly delivered, lost, broken, and even been denied access to my own stuff because it’s the wrong time of day.

Sadly, eBuyer use City Link for deliveries, and so I have to endure them. Today, some computer parts have arrived in a smashed up box. Sigh. 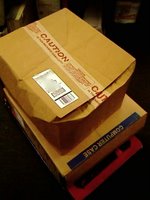 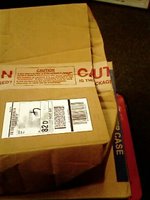 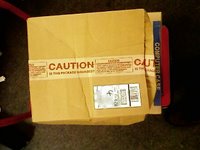 Gosh. Two rants about speed cameras in a row. How petrolhead of me.

There’s a road in Norfolk called the A47. It is, in fact, only one of two major roads in Norfolk, and runs east and west through the middle of the county. It’s a road I drive on almost every single day.

The A47 is almost unique in this county, as sections of it are dual carriageway. That’s as close as we get to a motorway round these parts. The town and city bypasses are mostly dualled, the rest of the route being single carriageway.

Ever since the Dawn of Time (that is, the 1960s), people have been campaigning to have the route fully dualled. This hasn’t happened. Things were promised, but never happened. Work even began, briefly, at one point – but was cancelled.

There are several notorious A47 accident blackspots. These include two stretches between Swaffham and Dereham, a bit between Dereham and Norwich, and a section known as the Acle Straight, between Acle and Great Yarmouth. In the section between Dereham and Norwich, there is at least one major accident a week, and a minor one almost every single day. There are several fatalities a year. I know this, because I’m often held up as a result. I also know this, because I know some of the people who have died.

As well as accidents, there’s also something these areas of road all have in common: they’re single carriageway.

In the last seven years, I only recall seeing three accidents on the dualled bit around Dereham. None of them were fatalities. I’m not saying there haven’t been any, but an accident a day on a similar length of the same road, compared to three in seven years? That says something, yes?

So imagine my surprise to see the new installation of some average-speed cameras on the dual carriageway this evening.

That’s right. They want people on the safe bit of road to slow down. No fixed cameras on the single carriageway section. No cameras around the blackspots where people have actually died due to people speeding.

There is just one reason why they’ve done this: money. They make money every time someone speeds. I’m not advocating speeding on any section of the road at all, far from it, but why put cameras where they’re not needed and not put them where they are? Because more people speed on the dualled section, and so would make the council more money, that’s why.