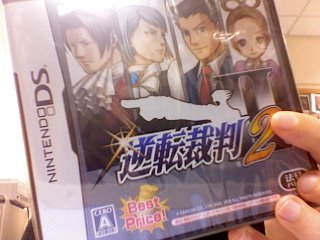 Just to see if it works!

IGN have been allowed to have a play with what is essentially the final PS3 hardware. Despite being mostly positive about the console, one bit sticks out – the controller.

Although much the same as the PS2 Dual Shock 2 pad, only without the “shock” as Sony wouldn’t stump up money to appease the rumble technology patent holder, the “SIXAXIS” pad holds some other more nasty shocks. Firstly, it’s cheap and plasticky, but more important than that are the new L2 and R2 triggers. Hurrah for Sony finally realising that analogue triggers are ace and all, but they’ve already broken them. They’re convex (not concave like every other pad with them ever) and slippery. So your fingers slip off them with easy. In addition, they’re stupidly placed so you can’t actually press them with your fingers properly. Genius.

And that isn’t all! It isn’t mentioned in the IGN article, but it now appears that in order to “bind” the new pads wirelessly to the PS3 console, you have to connect them up with a cable each time you turn the console one. Yes, that’s right. The wireless controllers need to use a wire. Excellent, Sony, just excellent.

Apparently, Mr Larry Bodine had a bit of trouble with his brand new dual-G5 Power Mac. I’m not surprised, as most of what it supposedly came installed with simply doesn’t exist. His tirade against Apple is somewhat lacking in facts, and he seems unsure as to what actual software he’s running.

In one paragraph, he states he’s struggled along with Internet Explorer 5.0, but in another he’s using Tiger’s widgets. The killer is, IE5.0 won’t run on, and doesn’t come with, Tiger.

I’ve emailed him with a few “corrections”. Lets see if he replies. I bet he won’t, as he’ll be swamped by real hardline Mac users…

I had to install the Edexcel “Adult Literacy, Numeracy and Key Skills Onscreen Testing” software today, and although irritating to set up, it seems to have gone well. On the Exambase website, where you set up exams and candidates for the software, I accidently clicked Submit twice on the Edit Exam screen, and this message came up:

Hurrah! Two games arrived for me today – Densetsu no Stafi 4, and Capcom Classics Mini Mix. Also got some bizarre Hello Kitty sweets to bump the order up to $50 (so I could get $5 off).

And two more $5 vouchers! BEST. Although, it does mean I need to order something else. Twice. Bah.

The Guts of the Wii Nunchuk – Gameworld Network news story

In other news, Nintendo call it the “Nunchuk”, not “Nunchuck”. Please update your brains accordingly.