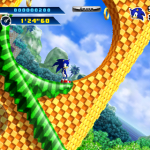 I said I wouldn’t buy it. I wasn’t going to buy it. I really didn’t want to buy it. Really. But of course, I did. Rubbish. But is it actually any good? Could it be a surprise?

In many ways, it does a lot right. Like, very right. Splash Hill, for instance – it’s ace. First level of Lost Labyrinth? Excellent. Mad Gear 3? Lovely. But some of it, like the nonsense of “get 100,000 points!” in Casino Nig^H^H^HStreet 2, and the AWFUL minecart of Lost Labyrinth 2 just make me want to smash things. They’re not hard, just rubbish.

It’s also disappointing that the whole game is just a remix of the previous games. They’ve literally just done new Green Hill, Casino Night, Labyrinth and Metropolis levels. On one hand, this is fine, but not when this is supposed to be a new sequel in the series – new levels that are similar to old levels (Angel Island/Green Hill, Metropolis/Scrap Brain) are OK, but the same levels with new layouts? Lazy. Same can be said for the bosses – they’ve actually reused the bosses from the previous games, just adding a bit of a twist after a few hits (which, if you’re quick, you don’t see in some cases). Not good enough, Sega. 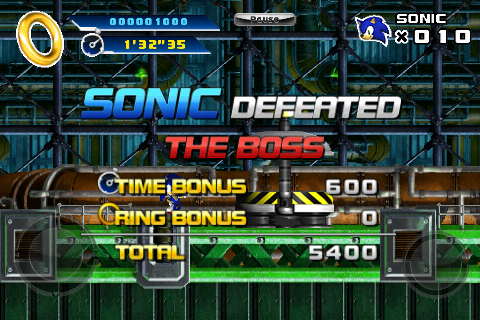 On the subject of bosses, Sonic 4 suffers from The SuckySuck(TM) bit. That’s Irritating and Unnecessary Gaming Cliché #1 on my list. For those not aware, it’s a Boss Rush just before the final boss. And is lazy.

Then there’s the homing attacks, which although sort of fit the game, shouldn’t really be there in the first place. They make an already easy game much too easy. However, due to the iPhone’s less than great touch controls, the attack did save me more than once.

Unforgiveable, however, are the bugs. Yeah, I seem to attrack bugs in games, but in fact they just annoy me more than most people who can just ignore them. The few minor ones I had (got stuck in a wall once, stuck in a rock once, glitched through loops multiple times, fell through a floor to my death once) weren’t too bad and are the sort of thing that happened in the original game occasionally too. The one that REALLY pissed me off, was on the end of game boss. His (presumably final) attack form took 5 or 6 lives to figure out a dodge for. Once I did, I dodged a couple of times, and then the game quit. That’s right – the game CRASHED on the end of game boss. Seems I’m not alone either – in searching for a fix, lots of matches on Google came up with the same problem – mainly for iPhone 3G devices, but also a few on 3GSeseses. Annoying. Very annoying.

Overall then, it’s nowhere near as bad as it could have been, and for about 50% of the game I was having fun. It’s a shame Sega didn’t reel in the crap bits, and actually put a bit more effort into making it a proper sequel rather than a rehash. Mind you, given past form, perhaps that’s for the best.

I certainly will not be buying the XBLA version on Wednesday.