Warning: here be spoilers! If you don’t want to read them, don’t read the full post!

Well, I’ve not finished it, if that’s what you’re thinking. I thought I was getting close, having reached Eeeeviiiil Layton and unmasking him, but no – there’s more. How much more, I don’t know, but I can’t imagine there’s a great deal as I’m now solving puzzles in the 90s and am 7 annabit hours in.

One of the puzzles I did today was this one below, which although I solved, I’m pretty sure has another solution: 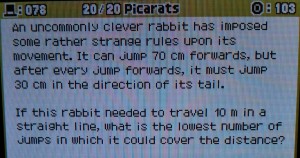 Now, the answer according to the game is 20, as the rabbit could jump 70cm, turn around then jump backwards 30cm (i.e. in the same direction), therefore covering 10m in 20 jumps.

However, what if it were only to jump backwards? Presumably, it could jump 70cm backwards, then not have to jump the 30cm as that’s only “after every jump forwards”. It would therefore cover 10m (actually, 10.5m) in just 15 70cm jumps. Problem, Level 5?