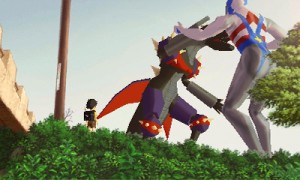 This is another one of those “Guild” games – short, experimental titles that were originally in a compilation in Japan, but were released in the UK as separate digital only games. I’d been interested in getting it for a while as people had said it was a fun little story in a slightly bizarre setting, and I’m a fan of strange and obscure Japanese games. However, when it came out I had lots of other games to play and no eShop credit.

It’s currently on offer, so a couple of days ago I bought it. And, within three hours play, it was complete – not that the shortness matters, as I went into the game knowing it was short.

The plot is a bit confusing, consisting of a quiet 1970s Tokyo suburb, its residents, and giant 70’s style monsters that appear each Friday night, which somehow doesn’t really concern any of the locals. Coincidentally, or not – you decide – the local TV station films their show about giant 70’s style monsters on Fridays. But then there’s some other plot about aliens, and how they may or may not be controlling, responsible for, or fighting the monsters.

You play as a young boy who has recently moved to the area, and much of the game is his interactions with other children from his school, his parents who run the local laundry, and other local residents – some of whom are a little… odd. You help solve minor incidents, riddles and relationship issues, all the time collecting “glims”, which you exchange for playing cards. You use these cards to “battle” the other kids in a variant of scissors, paper, stone. If you win, you get to be their “boss”, and they open up more information for you.

Anyway, the story is sort of gentle and sweet in a Ghibli sort of way, and certainly kept me hooked. Once completed, the game lets you continue to tie up a few loose ends and finish your card collection, but there’s no obvious way to solve all of the remaining side stories and a search of the internet shows pretty everyone else is also stuck, so I’m not sure I can proceed. Still, at least the main story is done.