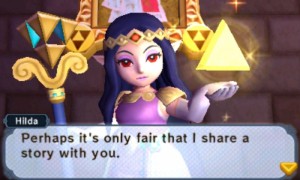 Yeah Hilda. You tell me a gooood story. I’m all ears. And not just because I’m an elf thing. Aha.

That’s it then – final dungeon done, final final dungeon done, end boss beaten. What a fantastic game. It’s just so perfect in almost every single way, and somehow manages to improve on the Zelda formula by getting rid of most of the linearity, by upping the pacing, and by making it somehow feel both very different and exactly the same as every other Zelda title. Yes, I know that sounds impossible.

The only thing that’s even slightly negative about the game that I can say is how easy it is. It’s very, very easy. It’s by far the easiest Zelda game and probably one of the easiest “big” games I’ve ever played. There’s simply very little challenge at all at any point. In fact, look: 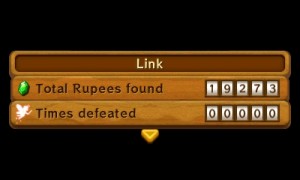 They’re my End Of Game stats. See how many times I was defeated? None. Not only that, but at no point was I ever even nearly close to dying. Not even in the “seems too difficult to do that early on” Ice Ruins dungeon. Of the seven main dungeons (which you can do in any order), I did the Ice Ruins second. I expected that the game would somehow ramp up the difficulty somehow (harder or more enemies, perhaps) as you progressed through the game, but it doesn’t. So, after completing the Ice Ruins I found that I’d done the hardest bit of the game (which even then wasn’t especially tricky) right near the start and it was plain sailing from then on. Even the end boss, which I faced before I’d even finished “tooling up” with all the best gear, was a complete walkover.

However, this is not a problem. It took away none of the fun and I still loved every minute. I’m even returning to it to get the remaining items and 100% it. It’s the best Zelda game since Oracle of Ages/Seasons. FACT.