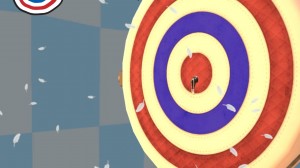 Less than four pounds on the eShop? Don’t mind if I do, sir. Especially since I had eShop credit that I didn’t pay for.

I liked the original Bit.Trip Runner, but it was so hard. I never got very far it – not even half way. It looked great and I loved the idea, but it was just too hard.

This is also hard. Not quite too hard yet, and I’ve finished World 2 without as many fails as I was expecting, so there may be hope yet. I’m a bit concerned there are twice as many moves as the original Runner, as I can see later levels becoming something akin to playing Chopin’s Prelude No. 16. Without ever having seen a piano.