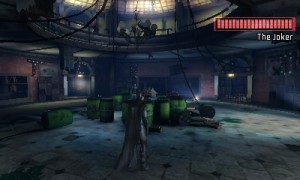 On the one hand, this is a perfectly serviceable Metroidvania style game with meaty Batman Arkham type combat and a story to follow on from the Arkham Origins game. On the other hand, it’s a 2D game that tries to fit into a 3D space, with the plane you’re on frequently changing and disorientating you, and a map that serves to confuse as much as direct.

Detective Mode returns, but is rarely sufficient to show where to go or what items are “suspicious” enough to blow up or hit with a batarang. No, you have to hold a “soft” button on the touch screen and scan the area for things. The entire game turned into move along a screen, scan the entire screen, repeat, with puzzles or fights taking a back seat. 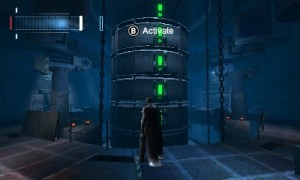 Sometimes even scanning stuff isn’t enough. A rusty hatch is described as “may break off its hinges with enough force”. Which do you use? Your batclaw to pull it down? Your explosive gel to blow it off? No – your batarang. Obviously. Later, another similarly described hatch needs gel instead. Another time, the claw. Or a fan, which is “possible to stop with explosive”, only you actually need the second gel upgrade. It makes you wonder if you’re doing it wrong, or if you just don’t have the right tool yet. 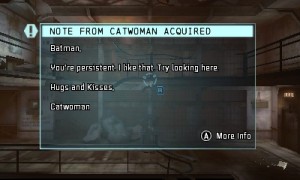 Overall, though, it was fun. The actual game bits proper, and some of the boss fights, are excellent. The hacking sections and complicated level layouts were not. Oh, and the bit you have to do after beating the last of the three main foes? Meaning you have to run round pretty much the whole map again? That wasn’t great. Perhaps if a bit more time had been spent trimming the fat, even if it meant cutting the length of the (already pretty short) game down a bit, that may have helped. As it is, it was well worth the reduced entry fee, but with hindsight I’m glad I didn’t pay full price.