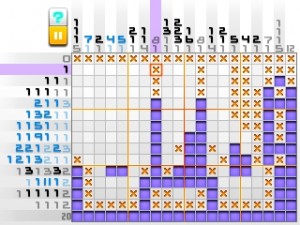 I do like a bit of Picross. Considering it’s a puzzle game that requires thought, I can lose hours to it by switching my brain off. Seriously – the puzzles complete themselves after a while. It’s like a reflex or something.

Picross e5 is exactly like Picross e4, so if you’ve played that you know what to expect here. The only slight surprise is that they’ve managed to squeeze some extra pixels out of the bottom screen and throw you some 20×15 size puzzles for the first time – 15×15 being the previous max. There aren’t all that many though, with the majority of the game being 15×15.

Maybe for Picross e6 they’ll stop pretending anyone actually uses the stylus controls (nobody does, you idiot) and just go all out on the top screen instead. Pretty sure they could squeeze a 30×20 on there.