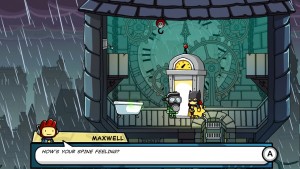 The game’s title is a bit verbose, isn’t it? I’ll be referring to it as Scribblenauts Batman instead, because that’s what it is. Sure, the rest of the Justice League are in it, but then Lego Batman 2 and 3 have them as well. Batman’s the headline act.

In fact, virtually every DC character you could ever imagine, including every variant (Earth Two, Red Son, Bizzaro, New 52, etc.) are also in it. And costumes to dress up other characters as DC characters. And all the stuff you’d expect from a Scribblenauts game usually. Lots. 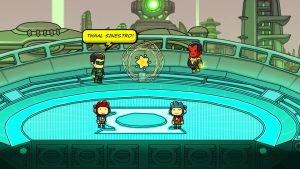 The story (yes, there’s a story) involves Maxwell and his sister Lily being transported to the DC Universe (or one of the DC Universes, at least), and losing a load of Starites en-route. Somewhere along the way, Maxwell’s evil clone – created by Maxwell – appears and teams up with all the DC villains. Each level is a set of traditional Scribblenauts puzzles (much like in Scribblenauts Unlimited) often with DC related characters, and a “boss battle” where you and a DC hero take on Doppleganger and a DC villain. So Batman vs The Joker, Green Lantern vs Sinestro, etc. These battles are really just more puzzles, but it breaks up the game and adds something a bit different. 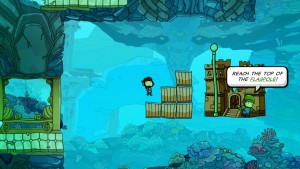 Scribblenauts Batman, then, isn’t any sort of reinvention of the series, but if you’re a DC fan there’s some joy to be had creating an enormous airborne undead radioactive pensive spotty exploding evil Aquaman (New 52) riding a yellow glowing sentient gigantic carrot with a jetpack. Or something. 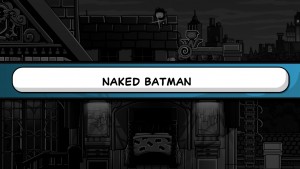 Like the previous game, it’s pretty short if you just rush through the main puzzles and battles, earning just enough points to spend on unlocking new locations (like Metropolis and Oa) and progress the plot to completion. There’s a load of replay value through, as each location has different puzzles each time you revisit them, and sometimes Mr Mxyzptlk pops up to challenge you to complete them all without using adjectives, or only using DC Heroes, or only with female characters, all for bonus points. You’re also penalised if you repeat words in a single level, so you can’t solve similar puzzles in the same way if you want maximum points. 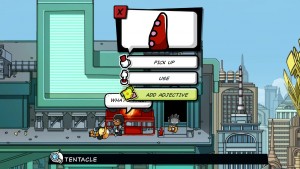 I’ve finished the story and unlocked, and completed, the Batman origin story (each of the main heroes has one as a sort of bonus) and quite a few of the non-story puzzles, so there’s still quite a lot to do. It seems there’s no checklist like with Unlimited though, so I’m not sure how you determine everything is properly 100% done. Unless I’m missing something.

Oh, and how am I playing this on the Wii U when it never came out in the UK on the Wii U? Because I imported it from Australia, of course! For some reason it was released there but not here, and although the Wii U is region locked, Australia is the same region so the game works fine. Phew, eh?