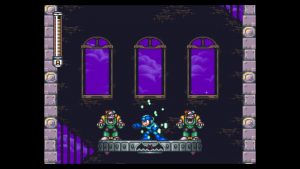 Unlike the NES Mega Mans (Mega Men?), Mega Man 7 has two sets of four robot masters rather than one set of eight. After beating the first four, a second set is added. I’m not sure why they felt doing this was necessary, as all it does is reduce the choices at the start of the game. It would seem that the first four levels have hidden letters on them (I picked up R and H), but whether the second set have, I don’t know – I never actually looked for any. 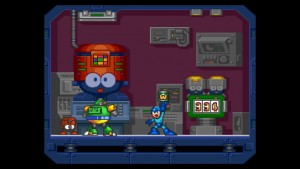 The second subscreen (which contains how many E tanks you have, amongst other things) remained pretty blank for the entirety of the game, so I’d obviously missed something. Something huge, as it turned out. Once I’d beaten the first Wily level (yes, no changes there), I tried to get back to the level select screen as I wanted to redo an earlier level and get a replacement E tank. I pressed Select twice by mistake, and ended up in a shop! I assumed there must have been one somewhere – after all, I’d collected about 600 bolts – but assumed I’d missed it or not unlocked it. I’d no idea you could enter it at will. And E tanks were just 60 bolts? Bargain! 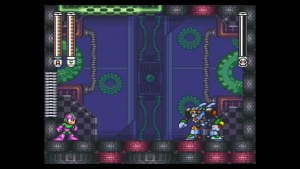 With that knowledge, I was less frugal with the tanks for the last few levels, and had a nice surprise when I found the W tanks (I’d bought a few of them too) refilled ALL your weapons, not just one. That made the end of the game easier! Which is just as well, because the final boss was nails.

Once again, Mega Man saved the world etc. and Dr Wily begged forgiveness and mercy, but this time Mega Man actually threatened to end him… but of course, robots can’t harm humans, so he didn’t. And Wily escaped once more. Sigh.

And then I started Mega Man X2.