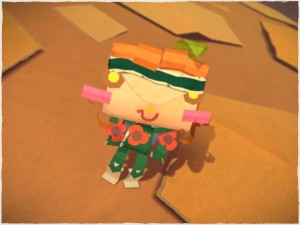 When Little Big Planet was announced, there was a lot of excitement over how innovative and clever and creative it was. And it was all those things, and it looked fantastic and everything. Then we all realised that it was just a platformer with horrible physics and a rubbish, game breaking and unnecessary third dimension. The fact that virtually all of the user made levels don’t bother with any level depth speaks volumes. Despite the lovely narration by Stephen Fry, it was ultimately disappointing as a game. A game creation tool, flawed and awkward as it was, great, but an actual game? Pretty but broken.

As a result, my hopes were not high for Tearaway, the Little Big Planet team’s followup. It’s all arty and stuff, this time going for a papercraft theme rather than fabric, but the creation side of things is heavily toned down. To the point where there is no level creation at all, and you’re restricted to little more than putting stickers on things. What I’m saying, is they removed the good bit of Little Big Planet to focus on the bad bit.

Perhaps this focus will pay off?

Well… no. Not really. 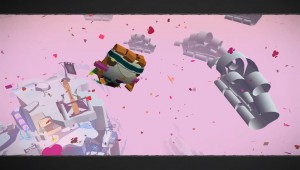 In Tearaway, the levels are all properly 3D now, like a standard platformer. You can move your cute little personified envelope, Atoi (or Iota if you choose a boy) around freely, jump (although not initially), roll to attack (again, not initially) and so on like you’d expect in any other similar game. These standard controls are augmented by horrific additional controls throughout the levels, in increasingly complicated and finger-twisting ways. Stand on a “Playstation shapes” pad on the floor, and you can tap the back panel of the Vita to jump. Yes, there’s already a jump button, but this is a different jump, made slightly more difficult because it uses the back panel.

Except that some of the “Playstation shapes” pads are for pushing your fingers “through” from behind, not for jumping. This feels fun when you use it early on, ejecting the “Scraps” baddies off the screen, but when you have to move Atoi at the same time, holding the Vita starts to become a little harder and accuracy on the back panel suffers. Other times you poke your fingers through to move blocks or activate mechanisms, again not an issue unless you need Atoi to navigate at the same time – and worse if you have to jump or roll as well. 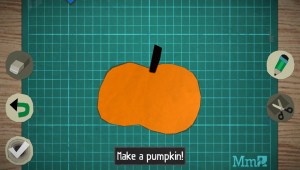 As you wander through the great looking paper worlds, your own face gurns down at you from the sun in the sky. Much like an episode of Tellytubbies. At various points in the story you (as in, You) pop up, always slightly looking off to the side as the Vita’s camera isn’t central. Sometimes you’re asked to take pictures of things in real life to use as textures on things in the game, which seems like a great idea but – like many mechanisms – is underutilised. Other times, you have to take pictures of objects with your in-game camera, to colour them in (which unlocks a real-world papercraft version for you to print and make, which is quite sweet), add difficult to draw features to, or record a bit of your journey. It’s never really clear why you need to take so many pictures, although some are occasionally used as mainly background graphics later in the game. 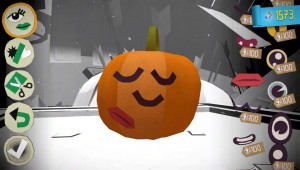 To expand on the drawing aspect, which is the one creation tool brought over from Little Big Planet: It’s rubbish. For the most part, it is triggered whenever you need to put eyes or hats or badges on characters you have met (or yourself), and there are a lot of pre-made options to choose from for the cost of a few confetti (the overly abundant collectable in Tearaway). If you want to make your own, though, be prepared to be annoyed and disappointed. The primary issue is having to use your finger as a stylus. Accuracy is out of the window immediately, hampering your ability to complete a “loop”, for example joining all sides of a square up correctly. If the loop is incomplete, you can’t “cut” the shape out. Additionally, the way you have to choose, cut and stack other pieces of paper is fiddly beyond belief, and two fingered rotating and resizing once you actually start placing your creations on a model is frustrating beyond belief. Eventually I avoided creating anything where possible, and did the bare minimum when forced. 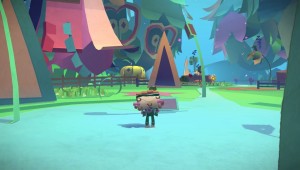 As Atoi and the story progress, you’ll meet lots of fun characters and have some humourous one-sided conversations. There are loads of great graphical effects with bits of paper flapping in the breeze and the landscape folding and unfolding like a pop-up book. There’s a lovely section where you make a pig friend and then take him for a ride, with a reprise late in the game which adds some twists. There’s a scarecrow with a pumpkin head who you give a recording of you roaring to, and he uses it to scare, uh, crows away. A section where you’re chased into the screen by huge monsters who increase in number, only to find out later on they’re quite harmless and actually help you. A little frogmonkey creature who becomes your companion for a while, eating his way through paper balls that block your path. A plethora of memorable moments, sadly tainted by so many other moments that are memorable for the wrong reasons. 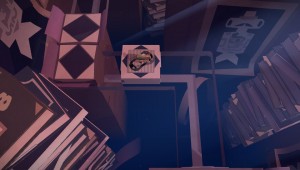 Like the time you have to walk along a wall (on some glue or something) but as you walk the camera moves so you have to adjust your heading. Which would be fine, only you also have to stroke the screen with your finger in a vague way to make extra bits of your pathway unfurl, struggling with unresponsiveness and often accidentally triggering previously unfurled rolls to furl up again. Or the entire section where you have to use the Vita like one of those labyrinth ball maze things to roll a messenger around while at the same time navigating Atoi on a different path while also prodding both the front and rear of the Vita to activate buttons and switches all while not being able to see properly where either you or the messenger is. 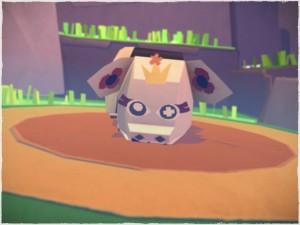 Then, after the first two main “stories” of the game, you’re given a new, personal story. “It’s experimental,” says Daddy Pig (who cannot be heard as anyone but Daddy Pig, which actually detracts from the immersion in the game). “Expect it to be weird”. By which, they mean, rubbish. They ditch loads of excellent bits they’ve already hardly used (the accordion and combat, in particular), add loads of tilty-Vita bits, more hard-to-judge platforming, and a whole pile of rolling along paths. There are hardly any characters to interact with either. It feels like Team A had finished with the game and passed it on to the work experience kid to add another half an hour’s content but without letting them have access to 50% of what they’d already created. Perhaps if they had finished it properly it wouldn’t have been so damn short either. 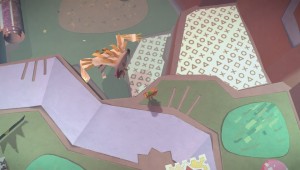 It is a shame, but it seems Media Molecule had a lot of great ideas. Where they went wrong was putting them all in the same game. With, for example, Super Mario Galaxy, there is a massive well of creative gameplay ideas that somehow it keeps drawing from for the whole game, reusing what’s great but never letting anything outstay its welcome, and always cohesively bonding the lot together. Nothing is out of place. In Tearaway, what works great is never exploited enough and some editing should have removed what didn’t work. Nintendo weave ideas together, Media Molecule have missed how this is done and just thrown everything into a big pot hoping it’ll mix well, and it hasn’t. The game changes too much as you play, becoming so many different types of game as you progress, and not in a pleasant form of evolution. Shoehorning motion and touch controls into games is something Nintendo is often accused of, but with this game Media Molecule take that to an unnecessary extreme, removing the fun along the way.

Ian Malcolm has a relevant quote that fits well here.