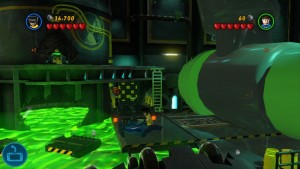 I think this may actually be the first Lego game I’ve completed entirely in co-op. Lego Batman 2 and 3 were both mostly co-op, but Lego Marvel Super Heroes I’ve played only in co-op with my daughter. Which is nice.

There’s a lot of mopping up bricks to do, as usual. We’ve done some, after finishing the story, but we’re still only at around 52/250. Finding the rest is going to be a pain, as although most of them are on the New York City map, it’s often not clear what you need to do when you get to them. Of course, a fair few are going to come from redoing the levels again in Free Play. Having said that, in recent games I’ve not bothered going for 100%. I think Lego Harry Potter 2 was the first where I didn’t, and although I had a pretty good stab at it for Lego Batman 2, I haven’t tried at all for Lego Batman 3. I really should. It’s a lot of fun.

Anyway! This is telling you nothing about this game. Which there isn’t a great deal to talk about, actually. It’s more Lego super heroing, only with Marvel characters instead of DC ones like Batman 2 and 3. Like Batman 2 there’s a massive open hub world (New York City), which seems more dense and full of life than Gotham. The split up mini-hubs of Batman 3 were a step back, I thought. There’s also a handful of things to do on the SHIELD helicarrier, up int he sky above the city. 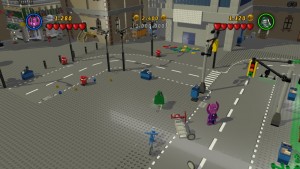 The story revolves around Galactus heading for Earth, and Doctor Doom, Loki and Magneto (as well as a few other less important baddies) seem to be taking advantage of this for a project of their own. As, variously, several Avengers, the Fantastic 4, Spider-Man and a few X-Men, you progress through the levels trying to beat these baddies and take back the Cosmic Bricks they’re stealing. The levels are all pretty standard Lego fare – different characters can activate different things, access different areas, or destroy or build certain types of blocks. They’re pretty varied, with settings underwater, in the Statue of Liberty and on a space station, and the characters you use are swapped frequently so you don’t get bored with the same ones.

The star of the show is Deadpool. He shows up for some of the bonus levels, and has his own room on the helicarrier where you buy found red bricks and watch the in-game movies and so on. In one of of the main levels, Doctor Octopus smashes through the Daily Bugle offices, and then in a bonus level later Deadpool narrates (with silly voices) as you, as Agent Coulson and Doc Ock, have to tidy up the mess. It’s very funny, and a memorable moment.

There aren’t any real surprises in the gameplay, and it’s a shame that two player “screen each” play sometimes makes the framerate nosedive (more so than in Batman 3, in fact, and that was bad at times), but it’s a solid Lego title and probably one of the best too. Although they’re all pretty great, truth be told.

Now I just need to find copies of Lego Lord of the Rings, Lego the Hobbit, and Lego Jurassic World and I’ll be up to date. Apart from Lego Dimensions (so called because your wallet needs a 4th dimension to hold all the money needed for it) which is out soon. Sigh.