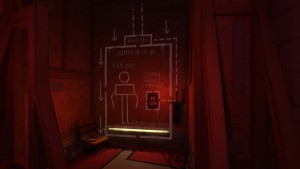 You know,”Dr. Langeskov, The Tiger, and The Terribly Cursed Emerald: A Whirlwind Heist” takes almost as long to say as the game does to play. On my first playthrough, I clocking in at just 23 minutes, and it would seem that’s pretty slow.

The title is also somewhat trolling. “Dr. Langeskov, The Tiger, and The Terribly Cursed Emerald: A Whirlwind Heist” contains exactly none of these things, except perhaps a tiger (although you never see it), since it’s actually set in a sort of behind the scenes area, backstage as if the game in the title is actually being played out for real by someone else (and you can’t play because they’re busy playing themselves). 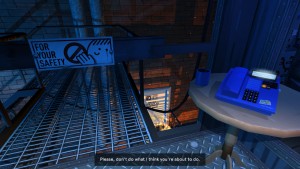 Which sets you up for one of those mostly puzzle free “walking simulators” which are a thing now and have a terrible genre title. Simon Amstell talks you through the events as they unfold in his usual sarcastic and seemingly inept style, while you assist in the runthrough of the game itself – pressing buttons and so on.

Not a lot happens, although replaying it is on the cards to nab some achievements (which are, after two updates, still bugged and I can’t get most of them) and listen to some actually properly funny cassette tapes purporting to be a developer’s commentary (but… aren’t). The current most recent update added a load of pretzels to find, for no discernible reason, too.

Dr. Langeskov, The Tiger, and The Terribly Cursed Emerald: A Whirlwind Heist is free, humourous, and definitely worth a play. I do get the impression, however, that it’s a setup for the actual game in the title though, which may or may not appear at some point.

And here’s a video of me completing it, so, you know, spoilers and that.