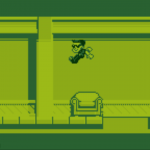 I seem to recall, back in the day, that although the film Hudson Hawk was utterly dire, the games based on it for various platforms were actually rather good. The Game Boy version, which I decided to play today for no specific reason, wasn’t fantastic as it turned out, but was reasonably playable.

Hudson Hawk is a platformer (because of course it is – pretty much all film licences at the time were), where Bruce Willis throws balls at things and steals paintings. There are two puzzles in the entire game, both really quite simple, and aside from not being able to see very far ahead of you (making some baddie appearances a bit of a surprise), the whole game was surprisingly easy. And short. It’s a very short game, especially since the first mission is longer than the other two combined, giving you a false sense it’ll be a much bigger than it was.