To the untrained eye, it would appear that I’ve already completed this game already, just a week or so ago. But you would be wrong, as this 3D Fantasy Zone II is actually the Master System version, whereas the other one was the (later) arcade version. They are both on the Sega 3D Classics Collection though. 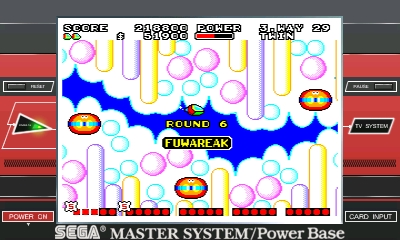 I actually tried to completed this before the other one, but I made a terrible mistake buying a load of smart bombs with all my money going into the final boss fight, and when I died lost all my power-ups and didn’t have any money to buy anything else. Not even Big Wings, which made one of the end bosses (there’s a SuckySuck Bit(TM)) impossible. Rather than start all over again at that point, I went on to the other version of the game, returning to this now. 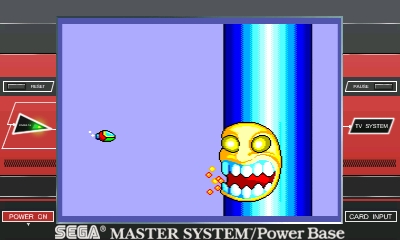 Although the game is effectively the same, there are some differences. Each level is seemingly larger, with up to 5 areas joined by warps (rather than two versions of each level, swapped between via warps). The bosses are mostly similar with a few variations, and you have an energy bar (which can be refilled and extended with power-ups) rather than a single hit kill. 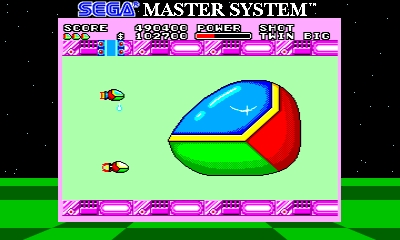 It’s obviously on less powerful hardware, but some slowdown and less impressive (but still excellent) graphics aside, it’s at least as much fun. It’s odd, that back in the day the Fantasy Zone series never appealed much, whereas now I love them. I feel I’m going to have to dig out the Mega Drive version soon now…