It’s the age old story: Man released from prison, man tries to find the reason he was framed, man gets caught up with the mafia, man visits strippers, man fights everyone and everything via the medium of a Match 3 puzzle game. We’ve seen it so many times before.

And that’s exactly what this is. There’s a branching story, with four endings (three of which I’ve seen so far), a lot of violence and somewhat graphic sex. Also, swearing. So much swearing. This is a game on a Nintendo console, lest ye forget.

The art style and animation is great, sort of like Sin City in the way it’s low on colour and high on gritty comicbook bleakness. The story is bobbins, however, and the game is incredibly short so even though you meet many characters your interactions are minimal and after maybe six or seven “fights”, it’s the end.

After each fight you can choose one from a random selection of stat boosts (more health, more damage dealt, better healing, etc.) but since you’ll come to the end of the game before any of them are really necessary what you choose is pretty pointless. 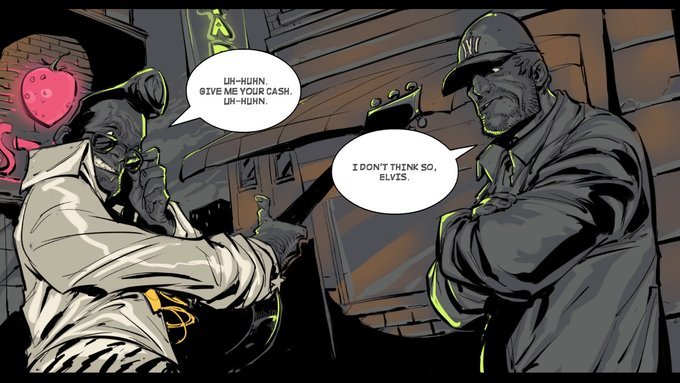 It’s a shame. Similar games, like HuniePop, Puzzle & Dragons and Puzzle Quest are all much, much longer even though their stories need not be. Here, after three hours I’ve seen all bar one ending and the plot could really have done with more meat. Make it three times as long, and Metropolis Lux Obscura could be a 4/5 title, but sadly it’s so lacking content it sorely needs (and feels like it should have done but the devs cut it short) it’s a 2/5 at most. The gameplay is there. The style is there. The game just isn’t.