The original Zookeeper was the subject of one of my very first posts on this here gaming diary over 16 years ago. Well, not quite the original game as that was a Japan-only GBA release called Zooo or something, but the DS version I played was pretty much the same game. Anyway, forward time on a bit and the world of match-3 puzzlers has changed a bit so you can’t just re-release Zookeeper and expect it to fit in.

So they’ve aped the likes of Simon’s Cat and Puppy Blast and added loads of gimmicks to the formula. Now instead of (or as well as) removing a number of each animal, you also have to deal with revealing panels behind them to remove, or have them in bottles that you have to match two or three times before they disappear. Or there are flowers you can’t directly match to remove, crates you have to break, or beehives where removing animals next to them releases bees. There are fruit bombs that blow animals away, conveyor belts that move things round, and crowns you can only get rid of by dropping them off the bottom of the screen, as well as power-ups to employ.

On top of that, progress through the levels unlocks money and items for your real actual zoo which you can fill, Theme Park style, with attractions and animal displays. This is not the same Zookeeper I remember.

But, it is at least as addictive and it’s a lot of fun. Some of the levels are incredibly tricky, and a few may only be clearable with luck, but I loved working through all 200 of them and it’s one of the more polished and solid games of its genre around. Plus, as it’s Apple Arcade, there’s no in-app purchases like all the other games have, and no adverts.

I quite enjoyed the first game when I picked it up on the Switch cheap a while back, but never saw this sequel (or rather, second half of the story) appear on there. I noticed it was on Apple Arcade and so thought I’d play it there instead what with it being essentially free.

Controlling it on a touch screen was actually more complex than perhaps it should have been, especially the zooming in and out which felt in inverse of pinch-to-zoom controls every other app ever has. Very little of the game is actually speed dependant though, so it wasn’t really a problem – I just preferred the joycon pointer waggle controls on the Switch.

The story continues on exactly from the end of the previous game, so it seems like one game cleaved in two rather than a separate instalment. It’s also more of the same thing – escape room style puzzles, with lots of key-finding and hidden drawers and arranging thing in a particular way. It did seem a bit easier than the first part, but a few parts of that were a little obtuse so maybe that’s intentional.

I’ve just got myself a new iPad so I’ve been flitting around some Apple Arcade games, and landed on this one. I’m not really sure what to make of it, because it’s a mostly-nothing game, and yet I got a bit sucked in.

The aim is to create everything. Because, you know, you’re God and all. You do this by combining things you’ve already created. Many of these make sense, like fire and sand make glass, but a lot don’t – like life and stone creating egg. Since literally all you do is combine things, it rapidly deteriorates into try-everything-on-everything like one of those terrible illogical point and click adventure games.

It’s very polished, and the voiceover guy who definitely isn’t trying to be Morgan Freeman is great (if a bit repetitive), but there’s not really any game here. You just find (i.e. brute force) all the combinations and then you’re done. So I’m done.

I discovered that, since they added an Apple app to my TV, I could actually Airplay my iPhone screen on there, and with a PS4 controller connected via Bluetooth, I basically have another console. And then, Apple gave me another free month of Apple Arcade. And then, I spotted Nuts on there, when I was about to buy it for the Switch. So here we are.

Nuts follows you, as a squirrel researcher, setting up cameras with which to watch what the squirrels get up to. You then wind through the recorded footage, print off screengrabs of important sightings, and fax them to your boss who frequently contacts you in your caravan via phone.

At first, you simply put a camera where you’re told, watch a squirrel appear, and then move the camera to where it runs off to. As it takes the same route each night, you can effectively follow it to its den. Later levels are more complicated, with multiple squirrels, no known starting point, or having to track them backwards.

It’s a fun little game, uncomplicated and clever, and there’s a whole overarching story as to why you’re doing this research too, which adds to it. It’s only a few hours long, but it doesn’t outstay its welcome and changes things up enough to keep things interesting for that time. Also, squirrels!

At first glance this is a JRPG, but actually, it’s somewhat different. There’s a wrapper story (with really nice puppet stop motion animation cutscenes) about a brother who is writing a JRPG to entertain his sick little brother.

The problem is, he doesn’t know how to code the AI, so he pretends to be the AI while his brother plays, and so, as him, you have to decide which enemies to have appear in the random battles. If you make them too hard, his character dies, but make them too easy and he gets bored. It’s actually really tricky, but pretty unusual in terms of gameplay.

It’s cute, and I really like the animation, but I did find the RPG bits too random.

I had no knowledge of what this game was going to be like, but from the screenshots I anticipated a narrative discovery game, hopefully with one or more toilets. Sadly, there were no toilets.

But I was mostly right about the narrative discovery bit. Discoloured is a first person puzzle game, although the puzzles require discovery more than logic. You are transported to a 50s style diner, but everything is in black and white. By finding and activating red, green and blue prisms, you put colour back into the world, but to do so involves looking at and activating everything, not always with obvious reason.

There’s a lot of to-ing and fro-ing as certain items and switches only appear or are useable when the correct prisms are enabled (or disabled), which is tiresome despite the very small area the game occupies. It’s all over pretty quickly, though.

It’s interesting but there’s no plot or story to follow, and the puzzles aren’t really the sort to give you any sense of achievement, and so coupled with the short length of the game I was just left with a thought of “is that it?”.

I was a big fan of Marble Blast Ultra on the Xbox 360, and this, apparently by the same team, coming to Apple Arcade was great… until I tried to play it and found it totally impossible to control with a touch screen. Then I realised I could use my 8bitdo controller with my iPad and, despite having to balance the system precariously on my lap, it actually worked well. Well enough to complete, even.

So the game isn’t as good as Marble Blast Ultra. I’m not sure what’s missing, but the levels all seem really easy and a bit bland. Perhaps the fun I had with the “original” was trying to beat friends’ times on the leaderboard and that’s not what I’m trying here, but I’m also not wanting to, so there’s still some spark not there.

That said, I did enjoy it. Except for that one level – called Escalation, I think – which I spent longer trying to complete one single jump on than I spent on the whole of the rest of the game combined. There’s a high platform you have to reach and you have to get a jump power up and then normal jump and immediately boost jump to get the height needed. Problem is, the timing is near impossible and until I did it by mistake there was no way of knowing if I was even doing the level correctly. Eventually I fluked it only to fall down higher up, triggering an earlier checkpoint on the way down, and then had to do it again.

What a lovely little game this turned out to be. It’s these tiny little Lego dioramas each with a little puzzle in – get you little lego boy to the other side of the screen, or make machinery do something, or build a thing in a certain way.

It isn’t difficult, although one of the puzzles introduced a new gimmick which I completely missed so it stumped me for a while, but it’s clever and looks incredible and if you have Apple Arcade already (as against all odds, I do) then it’s free and a wonderful thing I strongly suggest you play.

This was a very short Apple Arcade point and click adventure game from the makers of Machinarium. You have to complete little tasks for people, some of whom join you in your quest, and then when everyone is happy, you win.

There’s not a lot more to say about it without spoiling anything, but it’s a nice little thing to play for the hour or so it lasts. 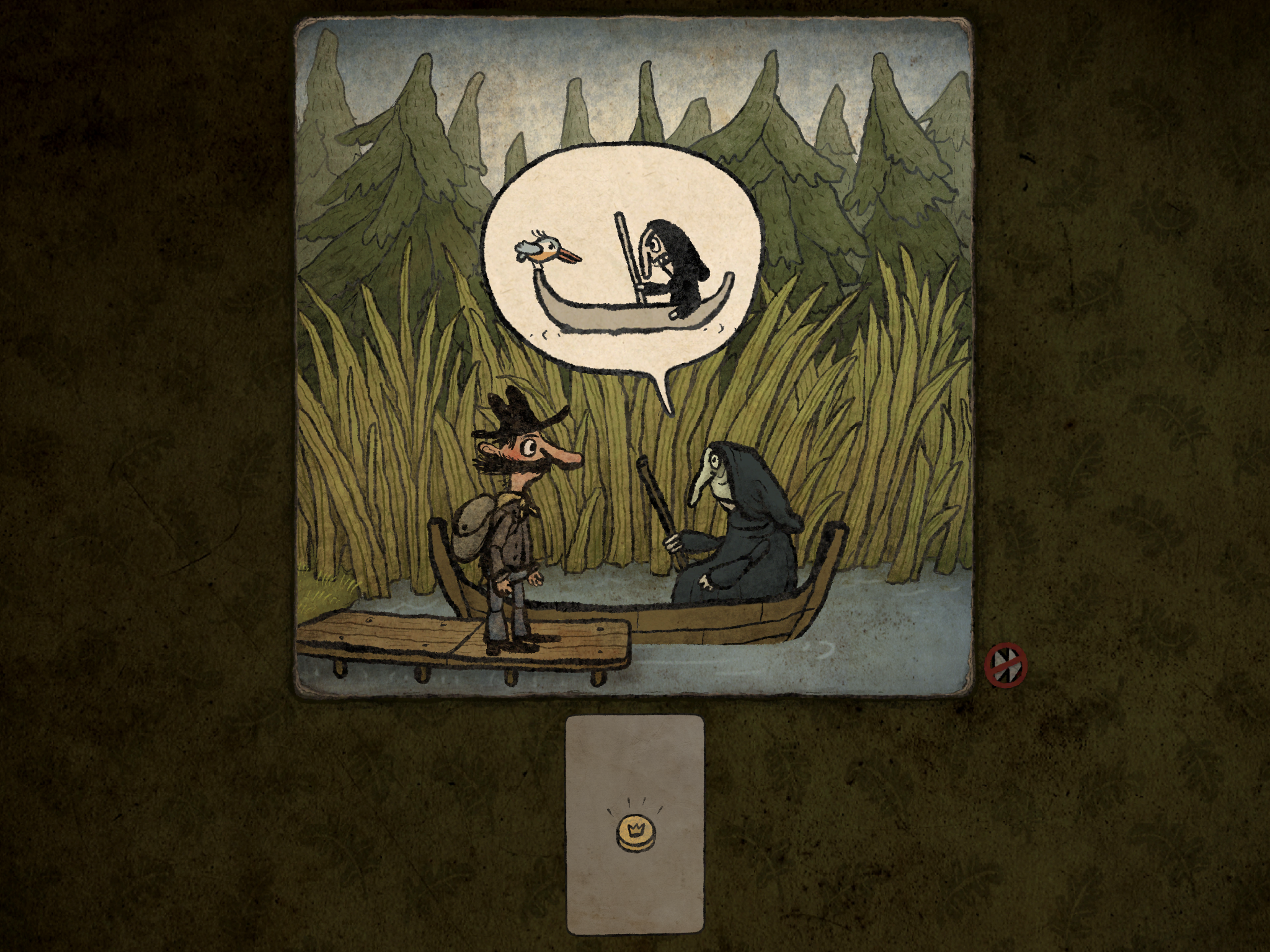