I’ve played the odd Platinum game before, so it shouldn’t have surprised me, but the final few stages of Bayonetta just went nuts. From the riding a missile Space Harrier homage (complete with “Welcome to My Fantasy Zone” and “Get Ready!”, and a remix of that games theme), to running up the wall of an external lift shaft, controlling Jeanne on her motorbike in space, to eventually taking on Jubileus: God in the form of a giant naked woman with elemental powers. And that’s just what happens before the end credits.

When I reached the tower that makes up the penultimate level of the game, I was fully expecting a SuckySuck(TM) bit – a boss rush, fighting all the previous bosses again. Which of course, is what happened. They were much easier this time around, and some were somewhat abridged, so it wasn’t as bad as it could have been. Part way up the tower there was a frustrating platforming section where Bayonetta had to run up some wall panels, but was only able to stick to those with patterns on. Oh, and the panels kept disappearing. The camera angle didn’t assist much, sometimes rotating so after a while I realised I had somehow started moving back down the wall instead of up it, much to my annoyance.

Like other Platinum games, though, it’s all about the fight, the pomp and the increasing levels of ludicrousness and focussing on the small minuses such as the camera or the asset reuse seems rather missing the point. After all, you’re a witch with sentient hair and guns on your feet who can summon demons and has to take down the creator of the universe. I don’t think slight quirks of the game engine really matter.

That said, fighting Jubileus was an exercise in acceptance. She/he/it was enormous, and fought you inside an even bigger sphere. Up and down had no meaning for much of the fight but navigating even short distances within the space was confusing, especially while avoiding attacks and trying to repel bullets-with-faces back at the boss. With her finally down, another nonsensical sequence played off with you flying after her into the sun, avoiding the planets on the way. The reason for doing this was not clear, as then the end credits rolled and after that there was another section of game where the statue of Jubileus needed to be destroyed as it plummeted to Earth.

More credits then, which went on for some time, with more lunacy. Some more fighting (for which you’re scored, so you’d better not have put the controller down!), a long sequence showing Bayonetta pole dancing, what seemed to be a music video with Bayonetta and chums (and foes) dancing in formation, and a bit where Jeanne cosplays as a nun. Erm.

What I’m trying to say, is that the game has lots of great fighting and is also one of the maddest titles you can (or rather, can’t) imagine. I’ve no idea if Bayonetta 2 can raise the bar, as I can’t see where else there is to go. It’s still Platinum though, so I expect it can. 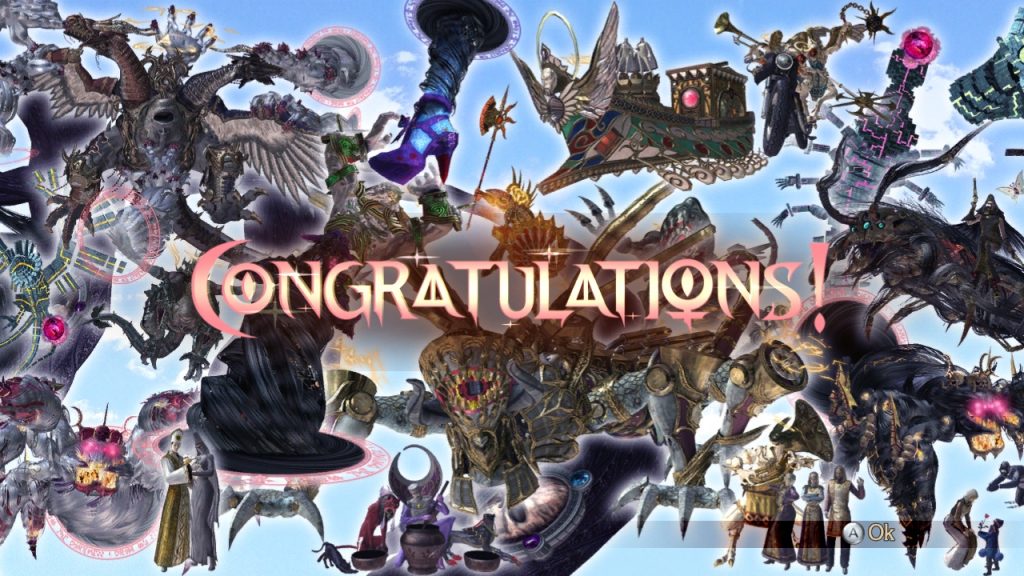 There’s a plot? Well obviously there is a plot about Bayonetta somehow losing her memory then meeting Jeanne and realising she has something to do with her past, but apparently there’s a lot more to it than that. Firstly there’s the guy she keeps calling Cheshire who can’t always see her (something about there being three dimensions that are laid on top of each other that Bayonetta can travel between yada yada), who says she killed his parents and then some little girl (with magic dimension-crossing glasses on) turns up and starts calling her Mummy? I have no idea what’s going on with the story.

There was a level on the world’s longest road (it reminds me of that terrible driving level on Sonic Adventure 2, actually) which I rode a motorbike. It was quite good fun, sliding under closing fire doors in the tunnels and jumping exploding tankers and doing loop-the-loops up and around bridges, but it went on. And on and on and on. Forever, or at least an approximation of it. Finally I blacked out or something and when I came to I was on the next level.

Some interesting boss fights have occurred, including a giant ball with loads of heads and those heads have tentacles coming out of their mouths. As you do. There have been a few platforming sections as well, which were a mixed bag, and for some reason I ended up in Vigrid yet again. And supposedly Nintendo are the kings of asset reuse.

Still, it is a lot of fun. The bonkers fighting and guns and the over the top punishments and demon executions are excellent and some parts of the game look utterly gorgeous. I have, however, been warned the final boss is a bit of a git though, and as such you will have to wait for a proper judgement.

There are a lot of cut scenes in this, aren’t there? I’m almost certain more time is spent watching the game than playing it, and it isn’t all just so you get gratuitous bum shots without all that silly fighting. I say silly fighting, but it’s obviously very good fighting – there just hasn’t yet been enough of it. Maybe it isn’t the game I was expecting?

That isn’t really a complaint, I should  stress, and I’m enjoying it a lot. It is completely nuts and typical Platinum nonsense. Today I had to outrun a lava flow, kill a two headed dragon in a church, and carry a giant egg timer out of heaven and into the middle of a volcano. As you do. Then I handed in some golden LPs and exchanged them for some guns, which is just like real life.

Oh yes, and I visited Balamory then watched it burn.

I bought this as part of the Bayonetta and Bayonetta 2 twin pack ages ago, but never got round to actually playing it. I have played demos of both games in the past, and quite enjoyed them, so I was pretty sure I’d like the full games. A naked Sue Perkins with magic hair with guns on her shoes shooting demons from heaven? What’s not to love?

I’m not very far in yet. I’ve played the prologue (well, I say “play” – most of it is cutscenes with gratuitous ladybottom-centred camera work, and guns) and then the first level? Chapter? The bit until just after the train station, anyway. The fighting is fluid and intuitive, with virtually any button combination seemingly being a pre-programmed fighting combo. Aside from watching for the “tells” necessary in order to dodge, mashing A and X seems almost as good as actually doing the punching and kicking properly.

Apart from that, the graphics look really good and the music is astounding (I loved Magical Sound Shower kicking in when in the car) and it’s really a lot of mostly mindless fun. Apart from the almost-puzzles which require a sliver of thought, of course.