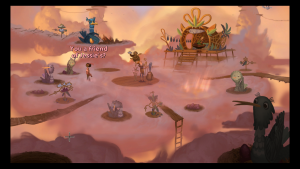 I like point and click adventure games, and it was only a matter of time before I went and bought Broken Age anyway. Then, of course, it appeared on PS+ so I didn’t need to. I sort of feel like I should do anyway, because I enjoyed it a lot and PS+ always feels like renting and renting is Bad. Probably.

Without giving too much away, Broken Age is a game of two halves played out as two seemingly separate stories. On one side, there’s Vella – a young girl chosen to be sacrificed to the monster Mog Chothra in order to protect her village in a ceremony that happens in every village every 14 years. On the other side, there’s Shay – a young boy who lives apparently alone on a spaceship and does nothing but terrible and childish “simulations” where he rescues woollen creatures from fake harm every day. 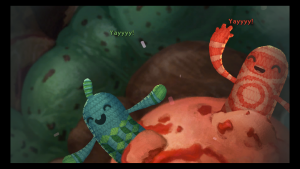 Naturally, their two stories are not only linked, but become one later on. That’s not really a spoiler as it’s pretty obvious; otherwise why not just have two separate games, eh?

I assumed that you had to play one story then the other, but it became apparent that you can actually flit between both at will. In fact, in Act 2, you have to do this in order to solve some puzzles (and it’s at this point I realised you could). Near the start of the game I guessed what the end of Act 2 twist (and the reveal about Shay’s spaceship) would be, although maybe I got lucky. 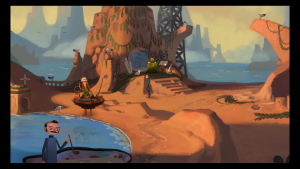 As far as the gameplay goes, it’s a streamlined point and click game. Streamlined in that gone are the days of choosing “give”, “go”, “use” etc., instead everything is context sensitive and this reduces annoyance greatly. I know Broken Age isn’t the first to do this, but it’s appreciated anyway. The puzzles are mostly straightforward, with actual simple logic to them, meaning they’re generally not frustrating as they can often be in these games. However, in the final half an hour or so of the game (or almost two hours as I played it…) there are some real head scratchers: It was too easy to seemingly get things right but them not actually work. Also, the less said about the hexapal wiring puzzles the better. Oh god did they annoy me.

Broken Age was funny just as you’d expect from Tim Schafer, had a wonderful story and a cast of great characters (almost all with some excellent voice acting too). It was pretty long for a game of this type too, not accounting for my lack of skill in the latter part, it was well over 8 hours. I can definitely recommend it to fans of the genre too.

Here’s my entire playthrough. If you’ve the stamina!