After many attempts, I finally got a win. Civilization VI is much, much harder than the previous games on the series, and seemingly much slower too making a lose late on even more frustrating.

Having lost most of my games as a result of not developing science quickly enough or paying attention to rival religions, I chose Gilgamesh as my character who boosts the former and I set about augmenting it with plenty of holy sites. That, coupled with being lucky to not have any war-like opponents, meant I could rapidly develop stuff and then have plenty of faith with which to convert everyone. Victory! 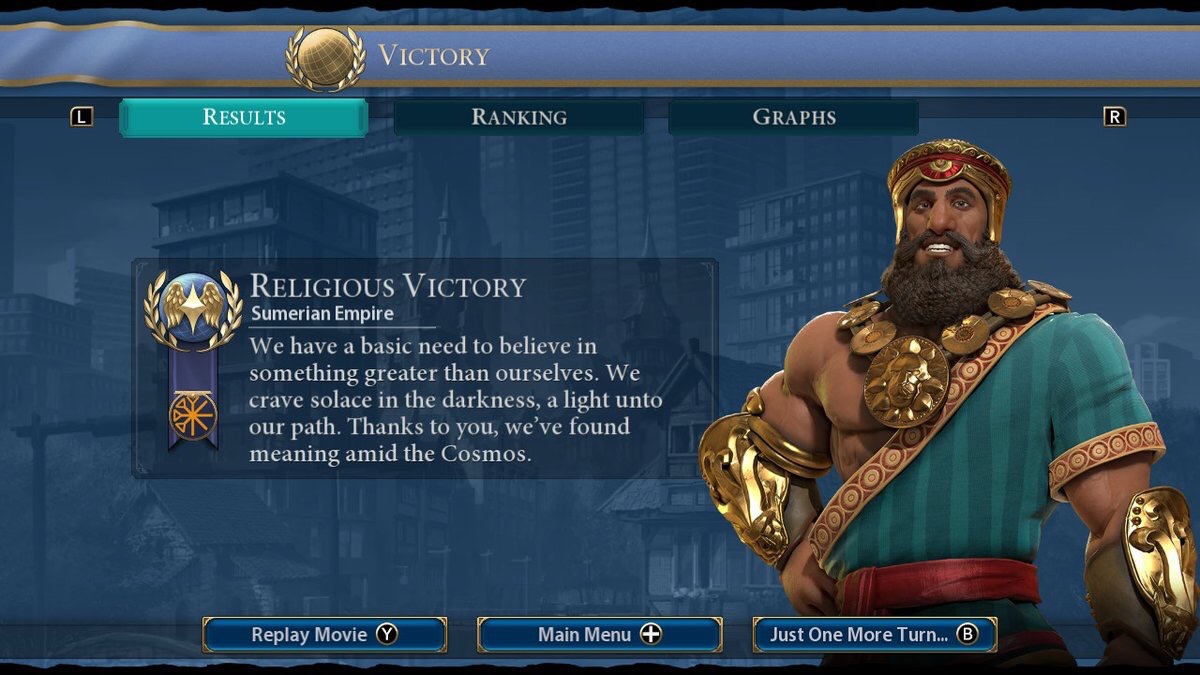 I have to say, though, that as good as Civ VI is, it’s not as good as previous versions. I approve of the hexagonal titles implemented in V, but it feels like the changes to how you develop technology and stuff has been a step back – or a step in an unwanted direction at least. The slowness of the game is a downer after the speed of Civilization Revolution, and I feel I enjoyed II and IV a lot more at the time than I did VI now.

But, none of those are on the Switch, so I can make do! 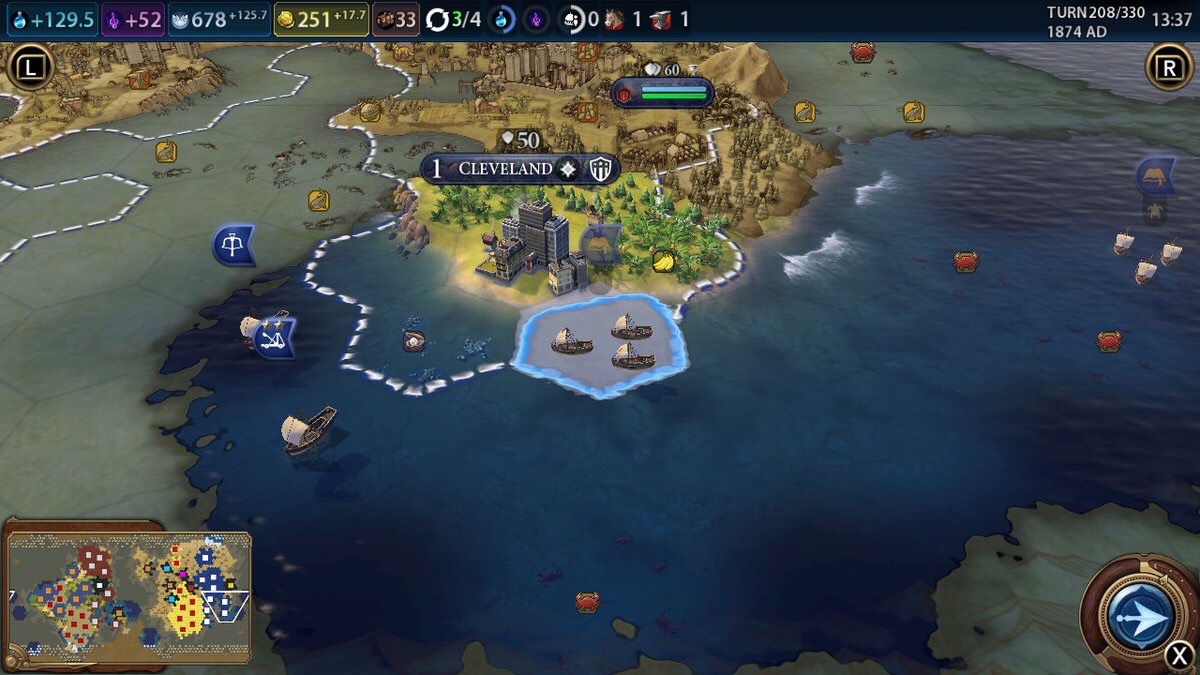 We could go into a long discussion about how Civ Rev was only considered completed when I’d achieved a victory with each and every nation, whereas with Civ V I’m counting it after a single victory, but I’ll counter all that with two points: 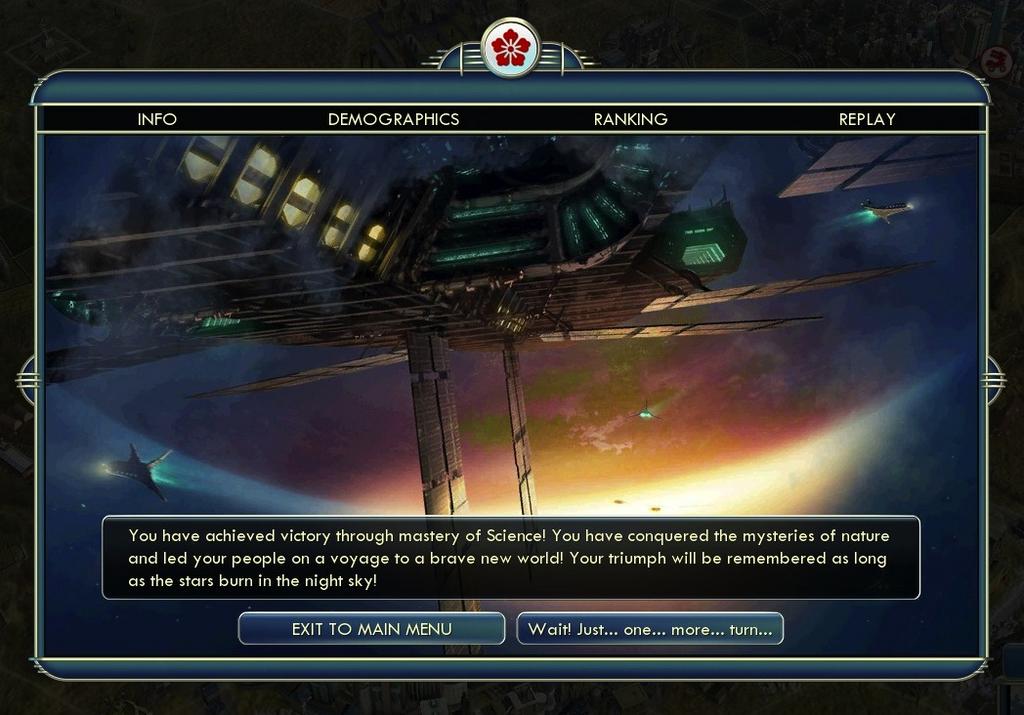 As you can see, I won through peace rather than ULTIMATE DESTRUCTION. As it turns out, in my rush to improve all the science, I’d actually reached the Modern and Future eras well before anyone else, so my few skirmishes were mainly my rocket artillery against some men with bows and arrows. I could have wiped everyone out after all. Oh well!

You know how I don’t play computer games? WRONG.

A couple of weeks ago I blagged a copy of Civilisation V (note “s”) from someone who had a spare copy on Steam. He said I could only have it if I promised to actually play it, so I did.

In actuality, I’d already bought it. Stupidly, I’d tied it to a Steam account I couldn’t access, so got it refunded, but I still wanted the game. The price then went up from £5 to £25 so I Banntyned it. Until now!

I do love Civ. A lot. I used to play the original a lot on my Amiga, and Civilisation II is one of very few games I ever actually bought for my PC. I liked Civ III, and Alpha Centuri was excellent too, if slightly different. Civ IV I only ever played as a Mac demo (I’d stopped playing computer games by then), and I’ve dabbled with FreeCiv over the years as well.

Oh, and the excellent Civilisation Revolution of course. Civ Rev is my most recently played Civ, and it’s much simpler, faster, and less serious than Civ V, which was a little jarring when I starting playing the new one this week.

After a couple of hours, though, I was back in the swing of things. In fact, in all these years, very little has actually changed. There are a couple of new types of victory, some resources are now finite (which was confusing at first, when I had no idea why I couldn’t build anything that needed iron or horses), and most importantly, the game grid is now made up of hexagons instead of squares.

OK, so that doesn’t make a massive difference. It just means there are no diagonals any more, so the number of spaces you can move isn’t affected by going diagonally.

After a slow start, where my Japanese nation didn’t seem to do very much for a good two hours or more, I finally settled a second city and built up an army capable of wiping out my nearest neighbour – Rome – and another Roman city just down the road. A couple of hours later, I took out the city-state (they’re new too, I think) of Geneva, and then returned to a peaceful existence, building many Wonders and trying to boost my Science and Culture – either of which is likely to be my route to victory. I got bothered by the Germans for a while, but nothing serious.

I got my first victory! Domination by 1960, using the Germans. Excellent.

So I bought it. And, although the interface is a little different, and the graphics are nearer the DS than the 360, it’s the same horribly, horribly addictive game. Only now you can’t escape it as it’s in your pocket. Gah.

Aaaand done! Well, sort of. I’ve now completed the game as every single nation at least once, and in every possible way at least three times. So it’s complete.

In terms of outstanding achievements, I have a few “do X on Deity difficulty” ones which simply are not going to happen, and the “win before 1000AD on King” which is plainly impossible. There’s also a “don’t change governments, and win on King” which should be possible, so I might give that a go.

More victolys today, leaving just 3 leaders to complete the game as. The majority of my victolys so far have been via domination (because it’s usually the first you get to) or tecnological (as it’s the only way to win on the Lightning Round scenario.

And another one down! This time I played as the Spanish, with the intention of playing for as long as possible and becoming as cultured as possible to coax more Great People to appear (there’s an achievement for having seen all 48 of them). Sadly, although I won, I still have 8 missing people from the portrait gallery.

I finally managed to get a city with more than 200 production per turn! Turns out the best way is to be the Americans, build a city next to as many mountains as possible, and then when you hit the Modern Era you build all the Wonders and buildings that bump up your production, then switch your people to only produce. Hurrah!

And then I won as the Americans too. 9 left!

Getting the achievement for building a city up to create over 200 resources per turn is impossible. Even on the easiest setting, using the Egyptians (as they get a production bonus), and focussing solely on developing a city for resource creation, I still ran out of moves before any of my cities passed 90 per turn.

Yeah, sorry. I’m addicted now. Played tonight and last night, but haven’t had time to post about it.

Anyway, the game is ACE, I’ve completed it about 8 times now, played some of the Scenarios (Lightning Round is amazing), and generally been sucked into the game totally.

Again. Civ always does this, which is why I never bought Civ III or IV. Curses!

I started a new game this evening, thinking I’d have a go at the “Win on King before 1000AD” achievement. Sadly, I didn’t even meet any of the other countries before 500BC, as they were all across the sea from me, so I gave up as there’s no way I could do it that attempt.

So I decided to give one of the scenarios a go instead, choosing “Beta Centuri”. You start off with all the technologies, and you’re attacked every turn by loads of barbarians. It’s very odd. Anyway, I was the Zulus, and very quickly managed to get a nuke, which I used to wipe out Moscow. However, I have since learnt that you only get one nuke per game, and I really need another one now Greece are trying to bomb my capital. Tch.

Hurrah for killing the French and Italians! 😉

Got myself some achievements – for Domination on King, and for winning as the Germans. I then went back to an earlier save (reincarnating everyone bar the Zulus) and got an Economic victory, before reloading an earlier one again and getting a Cultural one. I can’t reload for a Technology victory, as there aren’t enough moves left in the game to get everything built. I didn’t realise there was a move limit!

This arrived on Friday, and it’s all I’ve played all weekend.

First off, I on Chieftain level, as the Russians. Played four times, getting each of the four victories. It seemed very, very easy, so I bumped it up to Warlord level, and completed it (with a Domination victory) as the Aztecs. Their heal-every-win power is excellent! That seemed awfully easy to win too.

So I started again, on King difficulty, as the Germans. I quickly wiped out the Zulus, and then started getting attacked by the Romans, so set up a peace treaty with them. I then started to close in on the French, only the English got in the way and when I attacked them, the Americans joined in.

You know, it was terribly familiar.

Anyway, the English are gone now (I captured their capital, and the rest of their cities converted to other cultures), and the Americans now consist of only a tiny city on an island in the middle of nowhere. The French are being a real pain though – how come their pikemen can destroy my veteran Ninja Cannon army, complete with General? It was a 37.5 vs 3 fight, and they won?! How?!

I was really hoping this was going to be rubbish. Because I tend to get hooked on Civ games and since I don’t play computer games any more I thought I was safe…

But, as I feared, my “one quick go” lasted over an hour and I ended up running out of turns in the demo. So it has to go on my “want” list. I blame The Rev. It’s all his fault.