I turned my 360 on for the first time in months this weekend, and my download queue kicked in. The first thing that downloaded was this. It is, considering how it’s both a shameless advert for Doritos and free, really good fun. Much like the first game, really.

I was enjoying it, until I ran out of the stars you need to buy the next level. You see, you collect and win stars in each level, and then you spend these to buy ever more expensive extra levels to progress. A bit like Sonic and Sega All Stars Racing Transformed. Only when I ran out of stars, I was told to buy some more. For real actual money. I said no and turned it off. Ain’t playing that again. 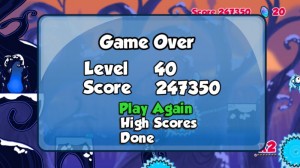 This promised to be a lot better than it turned out, sadly. It looks and plays like a freebie Flash game. A good one, sure, but still – it’s a purposefully hard platformer with a million levels that just ramp up the difficulty to “clearly impossible”. Although the levels are short, and you instantly restart, the harder levels are almost trial and error, or worse, luck – it’s impossible to see a path through the spikes and fire and stuff, let alone avoid them all.

It is fun, but perhaps more suited to an XBL Indie Game.

New Super Luigi U (Wii U) 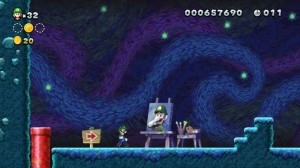 At first, I wasn’t sure I was going to like this. I don’t enjoy Luigi’s jumpyslidey physics, and the game world seems to be the same as in Mario U. Having just 99 seconds to complete each level would, I thought, make them all a mad rush. No restart points would be frustrating.

But, of course, I was wrong. His floaty flutterjumps make some of the levels easier. The levels are shorter too, so the time limit rarely comes into play. In fact, the only thing I’ve not liked so far (and I’m up to the “in the clouds” world already!) is the lack of a restart point at the bosses. Oh, and the fact the bosses are the same as in Mario U, I suppose. Still, it’s really good and well worth getting.