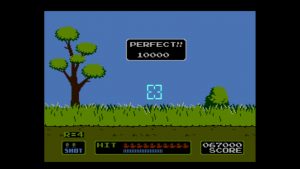 It’s Duck Hunt. What more do you need to know?

I bought it on Christmas Day, when it was released on the Wii U Virtual Console, but only got round to playing it today. It plays pretty well, but it’s harder than I recall. I’m going to blame that on the Wii remote though, rather than my faded skills.

Once nice touch is how the speaker in the Wii remote makes the clicking and echo-y spring crunchy clangy noises of the original Zapper. Totally unnecessary, but pleasing to the ear. Sadly missed, though, is the lack of flashing screen when you pull the trigger. Yes, I know it’s because that’s how lightguns needed to work on a CRT screen, but it still feels like it should have been there.