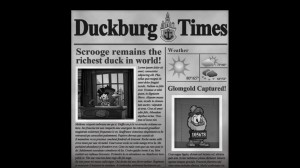 In my unprompted quest to clear some of my backlog (see Wonderful 101 and NES Remix), this was cued up next on the list. Previously on Duck Tales, Woo-oo[ref]Or should that be, aha, “Duck Tales, Wii U”? Hilarious.[/ref], I’d completed the first and second levels, and then… stopped playing.

As has happened before, many times, with many games. Stay focussed!

It’s not a very long game, so I thought I’d get it wrapped up. And I did. Turns out it wasn’t as hard as I’d thought previously – perhaps the first couple of levels were actually the easiest in the game? I don’t know, but I barely had a problem for the rest of it. Even the bosses were easier as I progressed.

I don’t recall a great deal about the NES original. I know I’ve played it, but not very much, so I didn’t come to it with a great deal of nostalgia. I do know however, and this is a Known Fact, that 8-bit Disney platformers are fantastic and 16-bit ones are terrible, so I was expecting to enjoy it. Thankfully, I was right as I did – very much so. It is true that it’s nothing terribly special, and it is also true that platformers have moved on somewhat in the intervening years, but that matters not. In fact, it’s nice to have a simple game like this every so often, without the constraints of the older consoles but with the “pure gaming soul” of the titles. Oh yes, and the Wii U version having the map on screen at all times is a nice helpful thing.

And that music. Joy.