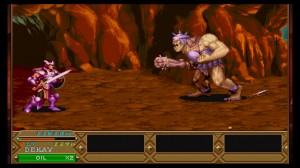 With Lego done and dusted I was all set to start on Batman: Arkham Origins but for some reason I decided to play this instead. I’ve been eyeing up the icon on the Wii U home screen for a while, thinking about finishing the other game in the Chronicles of Mystara package (I completed what turned out to be the second one a while back). So I did.

It’s not as polished as Shadow of Mystara, but then it is several years older. The graphics aren’t as good, the game is shorter with fewer branching paths, and I don’t think there are as many characters to choose from (I picked “Fighter” this time). 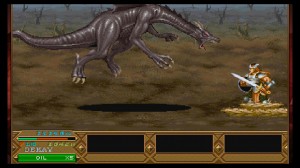 The main gameplay difference is how much more simple it is to select secondary weapons (like bows and magic) compared to the other game. This is probably down to having fewer options, but it means it’s a lot less fiddly. Having said that, they’re all pretty useless – aside from the oil “grenades” which you need to finish off trolls. Apparently they don’t actually die unless you burn them. 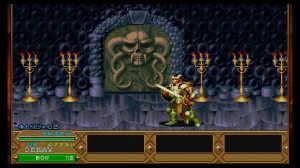 Oh, and here’s a little hint for you: when you get asked if you want to take the long, easy route round a mountain, or the short route through the mountain BUT THERE’S A MASSIVE DRAGON WHO KILLS YOU IN ONE HIT, take the long route. Because I said “Pff, dragons schmagons”, and was asked if I was sure. “I can slay a feeble dragon!”. I was asked again if I was sure. “Yes! Let me at him!”. I was asked if I realised it was certain suicide. This went on for a while, but finally, I was allowed to fight the dragon.

Some 20 credits later, one dead dragon.

The end of game boss was a complete walkover in comparison. In fact, the whole of the rest of the game, including the Shadow Elf (who was pretty difficult, both times you fight him). Be warned. 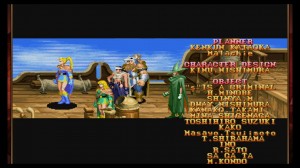 Firstly, it seems this is just half of the “Dungeons & Dragons: Chronicles of Mystara” game on the Wii U eShop. It’s a conversion of the 90’s coin-op, and is the sequel to D&D: Tower of Doom, which is also included in the package but isn’t selected by default and isn’t actually obvious that it’s there at all. At some point I’ll be playing that.

The main reason, aside from it being on offer this week, for getting D&D:COM at all when I’m not a D&D fan was down to other people enthusing about it, and saying it was a sort of Golden Axe game with almost Guardian Heroes type RPG-lite levelling. Sold!

It was fun too, insofaras the smacking things with swords goes. I’ve no idea what else was going on half the time, since the inventory system is never explained and I’d got half way through the game (as an Elf – Gauntlet favourite, y’see) before I realised you could change which magic spell you’re using, and I was almost on the final boss before I accidentally discovered I had a bow and arrow. No idea what the daggers and hammers and oil I could buy in the shops did. I’m not even sure how the levelling up works either, and I started on level 8, was told three times I’d levelled up, but finished the game on level 10. I’ve “bought” a load of unlockable things with… some sort of currency or points I’ve accumilated which look like they’ll make a second run through easier. Which I might do – there’s a load of branching paths through the game which would make repeat plays different.