I realised for the first time while playing EDF 5, having played all (I think) of the previous titles in the series, that I think the reason I enjoy them so much is that they’re basically musou games only with guns and aliens. Sure, there’s less base defence and area capture, but the gameplay is surprisingly similar.

After I’d played a few levels, my daughter noticed it was two player and so asked to join in, which made it even more like musou games like Pirate Warriors and Hyrule Warriors that we’d played together.

If you’ve played an EDF game you’ll know exactly what to expect from Earth Defense Force 5. Millions of giant insects, cities that get levelled, hundreds of weapons and the best worst voice acting ever. Only this time round, it’s all with a rock solid framerate rather than sometimes dropping to seconds-per-frame, even in split screen. I suspect running this PS4 game on my PS5 counts for some of that though.

The game also adds new enemies to the series. The “Hector” robots are gone, replaced with giant frog soldiers (that your teammates refer to as ”just like us” – are they blind?”) and armoured giant alien soldiers. There are also a few more varieties of ants and spiders and stuff. Otherwise, it’s basically more of the same. Which is no bad thing of course, and exactly why I bought it! 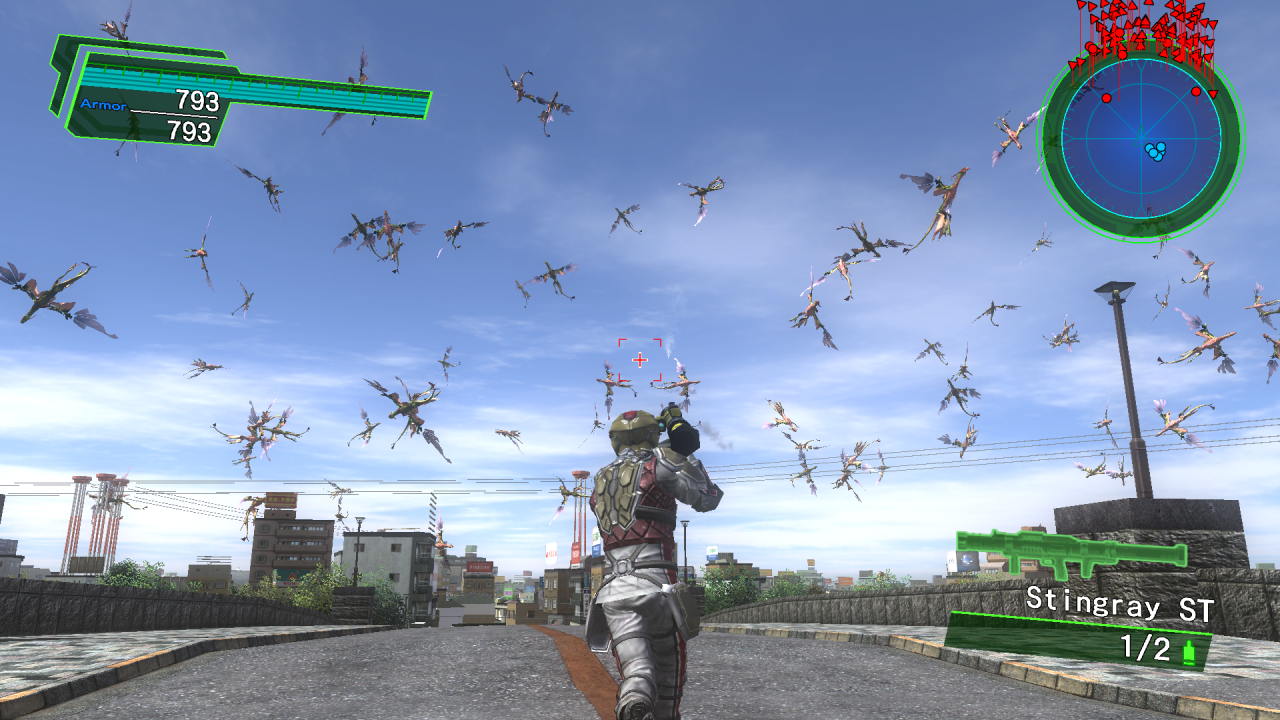 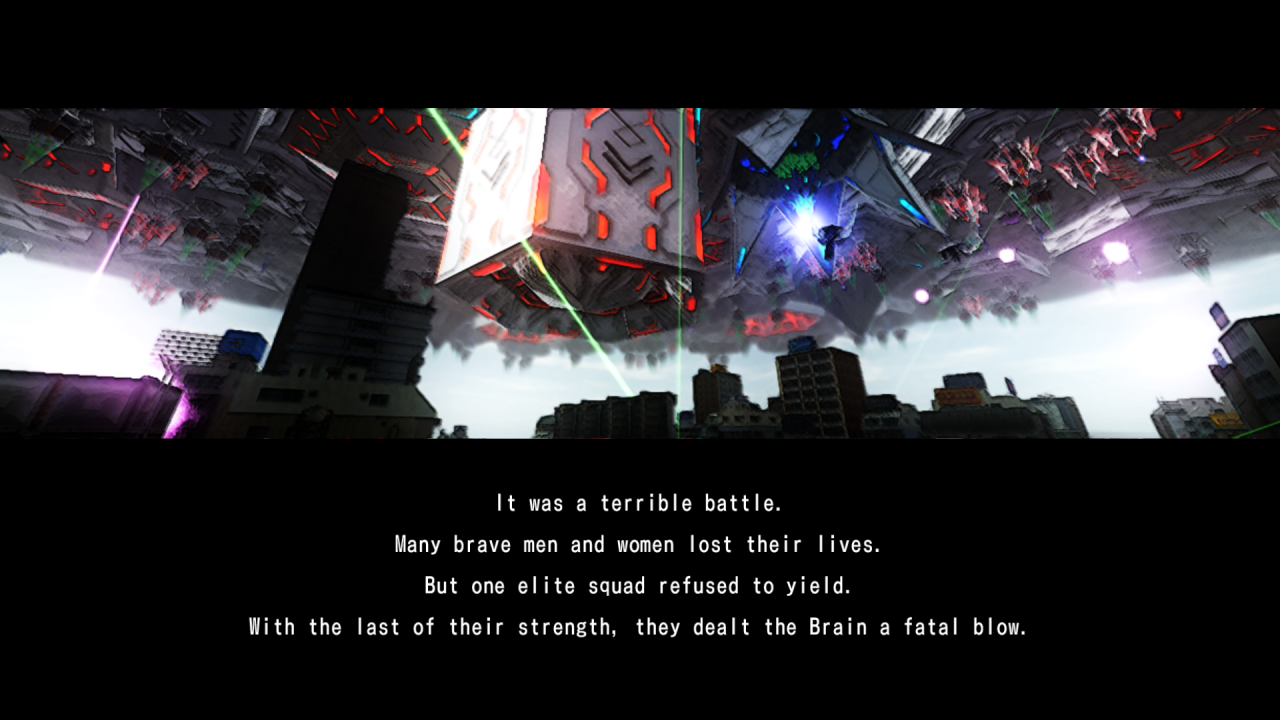 Well, level 52 threw pretty much EVERYTHING at me – every type of baddie yet seen (aside from the huge walker and dino-mechs), all at once, and then sent in a second wave just as I thought it was all over. But I managed it, after a few attempts, and then it was finally time to take down the mothership. And take it down I did.

Of course, it seems the whole of the rest of the world has been totally destroyed, and virtually every EDF soldier is now dead (aside from Storm 1, of course), so I’m not really sure what that achieved. But anyway – completed!

And, just for fun, I then tried the first level on Easy (and it was a walkover), Inferno (impossible, as even the drone ants take two full rifle clips to kill – each, and two hits from their acid makes me die) and then Hard (which was easy).

The war has certainly turned. Every level is now a mop-up of all the baddies I’ve previously had to retreat from, and some new super-giant giant spiders and flying ant things sent out as a last resort by the Ravagers. And lots, and lots, of things to kill at once. Fahsands, in fact.

And I’m up to level 52. Just this and the next level remain. EDF! EDF!

Yet more giant ant/spider/robot destruction today. Considering how repetitive the game sounds, it’s amazing how different each level can be. In one, you’ll be in narrow caves full of ants and a flamethrower is a must, and then the next, you’ll be in a city shooting down UFOs whilst avoiding spiders on the ground.

It’s really rather addictive. So much so, in fact, that I’m now up to Level 40 after some extended play this evening.

Still delving deeper and deeper into this abyss of insects. Only completed two levels though – the one where you start of surrounded (the trick is to dive into a tunnel, flamethrower-first, and turn around), and the one after it. I’m still only 10% complete on the game though. How many levels are there in this thing?!

Aha! Killed them! It seems that rockets are mostly a waste of time on the Hectors, as rifle fire can actually stop them charging their lasers. The upshot of that was me getting past that level.

I had a level full of red ants at the beach then, which was easy. I actually completed the level three times as the armour drops were plentiful and I made use of them. Then, more ant/red ant/spiders in the city with nests to blow up, and finally back into the giant caves full of insects.

SPIDERS! Big spiders that hop and fire webs! And go splat when you shoot them!

And then! A HUGE walking spaceship thing. And I mean HUGE. It has to be the biggest moving thing I’ve seen in any game ever. The graphics, especially in terms of how much is going on at once, are waaay better than I previously thought. No wonder my character looks crap and the buildings are bland when there are ninezwelftyten thousand hunter killers and Hectors and this giant walker and explosions and bullets and rockets and laz0rz and everything all going on at once with virtually no slowdown.

And! I killed a load of ants and spiders in a nest, and then killed a bit metal plated dragon! And flew a helicopter!

I’m stuck now though, on another level full of hunter killers and Hectors and a walker. Too hard, suddenly.

Anyway. Killed a load of them, then a load more, and then it was into a nest of ants, rapidly followed by a retreat. Tch, EDF cowards!

Since it was my birthday a month ago, I got this from my brother today. Bless.

And… it’s good. Virtually every level is “kill giant ants!”, and the graphics, animation, voice acting, sound effects, music and slowdown are all horrific. But it doesn’t seem to matter. As well as kill lots of giant ants, I’ve killed some Hunter Killers, seemingly stolen from Terminator, some ant-carrying UFOs, and more ants.

I’m only on level 9 or so, but have spent almost an hour and a half on it so far with just 3% complete. Amazing.