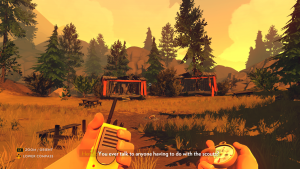 Firewatch has been on my wanted list for quite a while, but I felt I should both clear a few other games out first, and wait for a sale before picking it up (plus, it had horrible framerate issues to begin with – these have mostly been patched out now). This week, thanks to it both being on sale and me picking up some very cheap PSN credit, I nabbed it from the Playstation Store for just £8.92. And then I completed it.

The plot, which I’ll be vague about because spoilers, involves you, as Henry, taking a summer job as a fire warden in a remote part of the Wyoming wilderness. Your marriage has run into… complications… and you’ve decided to escape for a while, so this seemed perfect. You’re stationed up a watch tower, alone but with another nearby warden called Delilah for company via a radio link. You’re tasked with chasing off some teens for starting a campfire, keeping an eye on things, and generally hiking around a bit mainly just to pass the time.

Delilah chats with you, and you get to know a bit about each other (how much is up to you via dialogue choices) as the days pass. Soon, however, it becomes clear that something is going on. Somebody is listening in on your conversations. Someone is watching. Something is happening. 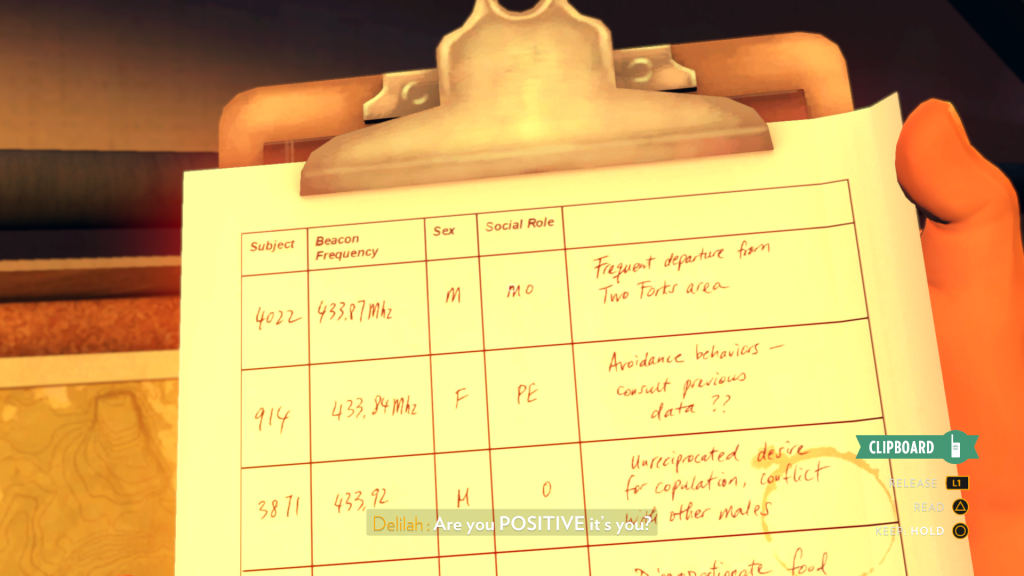 It could be some sort of conspiracy. Is Delilah who you think she is? Are the teens? Who keeps starting fires? What is the fence for? At times, it’s a mystery, at others, it’s almost paranormal. From the moment things get a bit weird, though, it’s utterly compelling.

Firewatch is a Narrative Discovery Game. Some people call games like this, Gone Home, The Stanley Parable, and so on “walking simulators”, but I take offence to this as there’s more to it than that. Yes, they’re very light on actual gameplay elements – Firewatch has no real puzzles and very little interaction bar opening stuff and chatting – but the exploration is how you progress the story, so I prefer to the term “narrative discovery”. I’ve said many times that a good story in a game can overcome most other limitations, so even though most of your time is spent walking around (although having to navigate by map and compass is fun) you’re following an excellent tale.

Henry doesn’t see much in the way of other people (or animals) in and around his watch tower, although I did adopt a turtle and call him Turt Reynolds, so you really feel how isolated he is. Even Delilah, who can see you from her tower feels a hundred miles away. When you enter a cave system and can no longer contact her by radio, you immediately feel vulnerable as your only lifeline is cut off – this is amplified when you make certain discoveries too.

In all, it’s a wonderfully told story, with some beautiful scenery and is pretty short so the long hikes never get a chance to become tedious as they surely would if the game was twice as long. The ending is perhaps a double twist, the discovery of may come as a disappointment to some, but I actually felt it was a relief: Again, spoilers so I won’t elucidate. If you liked Dear Esther, Gone Home or even Life Is Strange, then I can’t recommend Firewatch enough.

Here’s part of my playthrough, roughly the middle third of the game. It contains lots of spoilers, so beware: