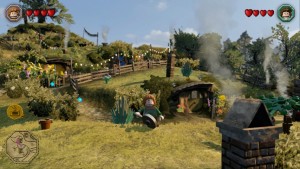 And that’s another Lego game done. Not 100%, yet, but the story is complete. Like Lego Marvel Super Heroes, I completed it in co-op with my daughter, but we found it somewhat shorter than that game. There’s obviously a lot to do still, not least with the new mechanic of finding “loot” (like ingots and wood) with which to make stuff. This time round, there’s even more reason to smash all the things.

The plot was sort of how I remember the book to be (I’ve not seen either Hobbit film), but sadly ended abruptly at the point where I assume the second film finishes. Since there’s no third film yet, it’s not included in the game – and I’ve heard they’re not making another Lego title to continue it even when it’s out. Shame. 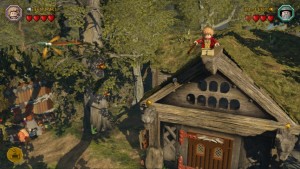 Similar to Lego Marvel, Lego The Hobbit has a massive overworld to explore with lots of errands to run and characters to help. Unlike Lego Marvel, none of your characters can fly (at least, none I have yet) so it’s not as much fun to get around. You can use warps where birds carry you to set points, but it’s still often a trek – higgledy piggledy o’er hill and dale – to get to where you want to be. There’s clearly a lot of characters, but a tiny amount in comparison to Lego Marvel. They’re all easily confused too, with SO MANY DWARVES all with different skills but they all look the same. Gah!

All that said, and the bugs taken into account (It’s a Lego game – of course it has bugs), it was still a lot of fun. I think we’re down to just three Lego games now – Lord of the Rings, Jurassic World, and Dimensions. Best get on them, then.