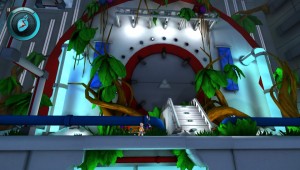 This was a surprise. It looked a bit rubbish, and some of the reviews suggested it was average at best, but it’s actually a really good fun platformer, with a novel jump mechanic. 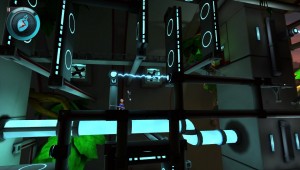 You have a gun which you can use to both shoot baddies and switches, but also use the recoil to jump and boost. The levels have walls to blast through, electricity beams to avoid (and slip through when they turn off temporarily), bounce plates, portals, conveyors, and all sorts of other gimmicks and hazards. Some of these add puzzles to the levels, others require dexterity or timing. Or both. 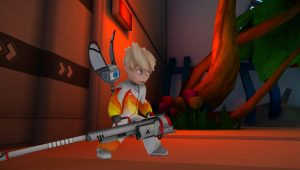 At the end of each chapter there’s a boss battle against a giant robot. You can’t actually harm it directly, so have to use the environment to do that instead – which is also puzzling on a couple of them.

There’s nothing in particular that the game does amazingly well, but it’s solidly put together, the controls and the recoil feel perfectly suited, and although some levels frustrate, it never gets too hard for its own good. It’s a little short, and some good ideas aren’t used enough (like the red “extra powerful” recoil), but I suppose they need to hold something back for a sequel. Maybe.