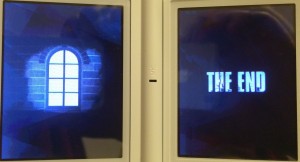 Obviously, I’m going to have to stick some spoilers in here, otherwise I’m not going to be able to say anything about the game. Because, oh boy, were there a few reveals in the latter half of Last Window. Like in the first game, hardly anyone was quite who they appeared to be, and everyone had at least one secret to hide.

The main “what?!” moment was when Dylan – as in, bumbling clumsy sticky-beak handyman Dylan – is revealed to not just be “a bit curious” or even “somewhat creepy”, but in fact is spying on behalf of Nile – the mysterious crime organisation that operates outside the law (and, as it happens, within the law itself). Sure, I thought there was something a bit odd with him, but he’s essentially the main bad guy! 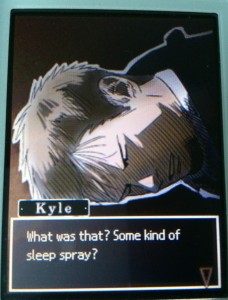 Then there’s the full backstory of Mags and her involvement in the past events, leading to her almost killing Kyle and Tony (seriously – old woman got mad ninja knockout skillz) when Kyle’s just about to make the final breakthrough. Where the hell did she get “police-strength sleep spray” from? It’s never explained.

And Will White not being Will White? And Marie nearly jumping off the roof to her death? Drama!

Anyway, as in Hotel Dusk, the last few hours play is mostly about tying up the ends of each character’s story. Most of them have a past issue that needs resolving, or they need convincing to leave Cape West, and once that’s done Kyle moves onto the getting the final answers to all the remaining questions. In this game, that meant finding a hidden poker room, which revealed in a very Raiders of the Lost Ark way, a secret stash containing the very gem Kyle’s dad died stealing 25 years ago.

As with Last Window, there’s a lot of million-to-one chance coincidences. Some are explained, some are left as mere unlikely chances. This does make the story feel a little contrived, but thankfully – again, like the first title – the story is strong enough to carry it. It felt like a proper detective novel, played out with a stylus. 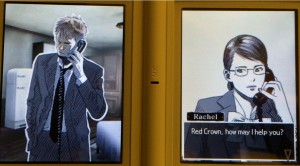 There weren’t many puzzles, and most were quite easy, but it made (as did Cing’s other works) great, and unusual, use of the DS too. In one part of the game you have to retrieve a key from a musical box. It’s inside a rotating drum in the box, and the DS itself acts as the box and lid. Open the DS, the music plays and the drum rotates. Close the DS and the music stops. To get the key out, you have to mostly close the DS when a gap in the drum lines up with the key, then press R to lever the key out a little, then squeeze the stylus inside the mostly-shut DS to “grab” the key and pull it free. Awkward, just like the actual task would be really. Brilliant!

At a little over 15 hours I’d finished the game. I’d say that was a pretty much perfect length to spread the story out without wishing for it to just wrap up quickly. My only complaint is that there aren’t any more Cing games to play, as they disbanded years ago. Shame. 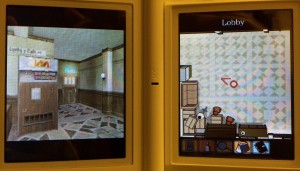 Super Backlog Fighter! I’ve had this for almost a year now, but, like many things, it’s sat on the Pile of Shame (TM). But now I have saved it from that pile, and am playing it! On an actual DS Lite too, for added retro authenticity. Not that the game, or the DS Lite is actually that old, but you know what I mean.

Now, I recall many of the events in the first game, and the basic plot and so on, but everything else has long since fallen out of my head. Through playing Last Window, some has returned, but I feel I really should re-read the novel that came with the original to refamiliarise myself with what went down.

Last Window is plainly a continuation of the original game in more than just plot. The controls and graphical styles are the same, the sort of dialogue and puzzles wouldn’t be out of place in Hotel Dusk, and you’re even (essentially) in another hotel – only this time in Room 202 rather than 101. If only developers Cing were still around so we could find out what mystery surrounds Room 303. Sadly, 404 is not found. Oho. 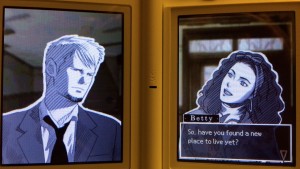 Like the first game, there are some boggling coincidences in the characters and locations, almost as if the Hotel Cape West is the receiving area for some sort of alien kidnapping where people who have linked pasts (not all knowingly) are plucked out of their lives and made to stay in the hotel until they figure out what they all have in common. And not just links to each other, but also links to the events of 13 years before the game takes place (which is 1980), and a further 12 years before that. And murder. Or possibly murders.

Currently, I’ve played up to part way through Chapter 5. I’ve gained access to the out-of-bounds (probably due to said murder) fourth floor of the Cape West, found more questions than answers, and poor lonely Kyle Hyde (the protagonist) has completely failed to score with, or, in fact, even notice the rampant flirting of the resident Filthy Minxes (TM) Claire and Betty.  He’s too busy being down about the death of his dad, being evicted from his apartment, and losing his job. Poor guy.