In this new region, fire and switches played big parts. Certain rocks could be burnt, opening up new paths, and switches reversed black and white rocks (and baddies). There were also special areas where time froze, and using your freeze time ability time flowed only in these areas, making for some interesting puzzles. In one section, you had to coax a flaming baddie into a time freeze area so you could push it around while frozen in order to redirect it towards some rocks that needed torching. It was surprisingly cerebral.

What was actually the final boss turned out to be a pain. He wasn’t especially hard, but he was several stages long and in each his weakness and method of attack wasn’t immediately clear. In a couple of these stages a single slip meant quick death, and all of his stages needed to be redone each time you died. Checkpoints after each would have been much appreciated. Worse than all that, however, was that once defeated for good, the game crashed at the credit sequence. And then did it again on my next attempt. And again. And again. Thankfully, it has recorded I’ve completed it as it allows me to start a New Game+, but I’ve missed out on the achievement for doing so. Odd.

In spite of those final few issues with Nova-111, it was a nice little game, using many ideas I’ve seen elsewhere in a unique blend. If I’d had known it was going to play like this, I’d probably have bought it long ago. As a PS+ freebie rental, it’s certainly better than a lot of the stuff on that service recently.

Here’s a video playlist of a mostly complete playthrough. Skip to the end for the final boss fight (spoilers!) and see it crash out! 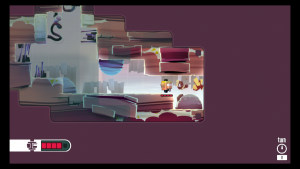 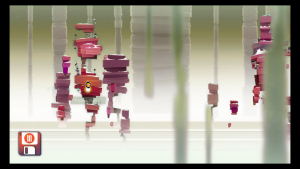