A lot of things, it seems. I’ve had a glut of new games over the last month and I’ve been playing each for a short time. I’ve yet to settle down and just work on one or two, so I’ve not made much progress in each. So here’s a list, in no particular order: 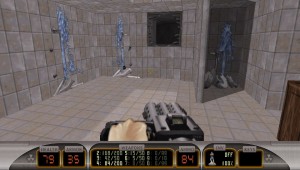 My subscription to PS+ was autorenewed before I could cancel it (the whole service got DDOS’d and I couldn’t log in), so I thought I might as well make use of it. This is one of the rentals.

It’s Duke Nukem. A bit easier to control than the 360 version that appeared on XBLA, and with a nice (but often broken) rewind feature if you die. It’s the same game that it ever was, so great. Half way through the first episode so far. 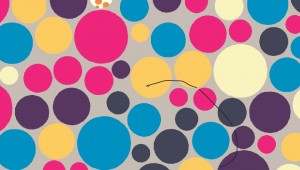 At least, I was playing this until my family hijacked my save game. I’ve no idea what’s going on. You’re a snake which flies around bizarre levels bumping into things which sometimes react, solving puzzles that aren’t really puzzles, in an attempt to reunite with other snakes. I think. You’re just dropped into the game with no explanation and just expected to get on with it. It’s good, but I’m confused and lost. No idea why I bought it, although it was on offer.

Super Smash Bros U (Wii U) 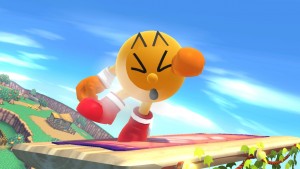 I’m sure the Gamecube version of this was easier to control. I’m still sticking mostly to Mega Man, and I’m trying, but it does seem very vague as to whether I actually pull off moves or not. And I can never remember in the heat of the moment how to do the special moves that try to carry you back onto a platform when you’ve been punched off. It’s utter chaos, but then I suppose that’s the appeal. 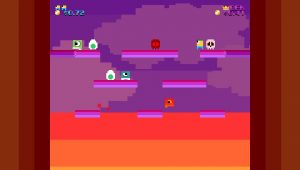 Another PS+ rental. It’s an 8bit (or lower, perhaps – it’s more like an Atari 2600 title) looking single screen arcade platformer. Eggs drop from the top of the screen, and after a while they hatch. Baddies pop out and when they hit the lava at the bottom of the screen they “level up” and become more dangerous, and then level up again each time they hit the lava. You have to beat them by chucking eggs at them, or by destroying the eggs by throwing exploding skulls at them. Then UFOs appear and it all gets really hard. Really like this game, so much so I’ll probably buy it when it hits the 3DS. My high score is $1.76, in case you want a target (an easy target) to aim for. 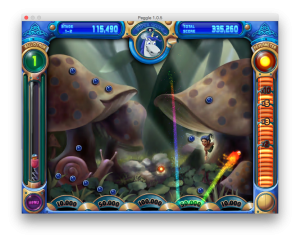 I happened to be using my old MacBook, and Peggle was on it, and I couldn’t remember playing it on there before so wasn’t sure it would work and then I ran it to see and it did work and then an hour passed magically. It’s Peggle, and that’s what happens with Peggle. No idea how far I got.

I didn’t want to like this because I really wanted a Wii U version instead. Sadly, that doesn’t look likely to happen. It’s Monster Hunter, but made a bit easier to play (on the 3DS) as I’ve a shiny new New 3DS with extra buttons and a prodnipple, so it’s essentially got the same controls as the Wii U version of MH3U anyway.

I chose the Great Jaggi hunt as I know where I am with that, and picked a hunter with twin blades, not a class I’d used before. I don’t know if it’s the different weapons, or the different game, but the combat was so much swifter than I ever had on the previous game. Mind you, that was with a Great Sword and so slow and ponderous came with it. I like how you can now jump on the back of the Great Jaggi and slash at his (her?) neck, and it’s nice to have some new maps to hunt on. Do I want this now? Yes. Yes I do. 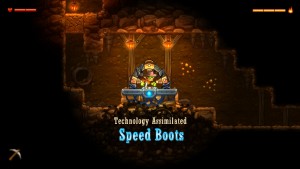 It’s the same as the 3DS game that I completed last year (or the year before?), but that doesn’t matter. It’s just as good, but all in HD and on the tellybox. I bought it as it was on offer and I was trying to spend enough in the Wii U eShop before the end of 2014 to get another £5 credit before they stopped running the scheme. Don’t know why I started this before the other games that I’d bought but haven’t played before – that’d make more sense, surely?

I’ve reached The Old World, and have a couple of upgrades from there. I’m pretty sure by this point in the 3DS game I had the ability to punch by now, so I’m wondering if I’ve missed something… 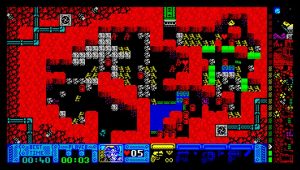 Stumbled across this, and as soon as I noticed it was basically a brand new Spectrum game, I had to buy it. Turns out it’s a twin stick shooter, with Spectrum graphics and sound, and even had a two minute long load (which you can skip – I didn’t). The plot is incredible – you appear to be Queen Victoria, dressed as a man, who decides to go to Mars in a giant bullet shaped space ship that’s shot out of a huge cannon, and, when you arrive, you have to shoot guards and zombies and collect keys and avoid massive centipedes while looking for tea and jammy scones. YES. It’s the best thing ever. 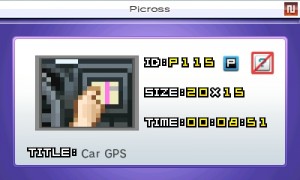 I was having a look at the eShop the other day and realised Picross e5 was out and I hadn’t bought it. So I bought it, and started playing it. It’s Picross, and I like Picross, so I like this. Aside from different puzzles (obviously), it seems to be no different to Picross e4. That’s not a problem, as Picross e4 was lovely.

Oh, remember my 360? Never before has a console so frequently used in the past been dropped so quickly. Mine barely gets touched these days. In fact, the only reason I turned it on was because I finally decided to get Minecraft, mainly for my daughter. I’d a pile of free credit, and since the 360 is the only machine I have that 1) plays Minecraft and 2) I have two controllers for (for co-op), it had to be that version.

Created a “creative mode” map, which was far too vertical to navigate, so after a while we binned it and created a flat world – which we forgot to make “creative”. So cue all the baddies in the world appearing when it got dark and we hadn’t built any shelter because all I had were a couple of oak tree seeds and some dirt. Then we explored a lot and it seems everything wasn’t just flat, as we found a monastery (I think) and I fell in a well and couldn’t get out and drowned. Yay?

While the 360 controllers were out, and we’d just taken delivery of a cheap Skylanders Swap Force starter kit (for the Wii U – to hell with the 360 now!), I thought we shoudl probably finish off Giants.

So we worked through two more levels – Kaos’ castle, and a Ghost Ship. I’m sure the game it waaaay harder than the original Spyro’s Adventure, you know. We’ve about 30 Skylanders and ploughed through pretty much all of them on both levels.

Adventure Time: Explore the Dungeon Because I Don’t Know! (Wii U) 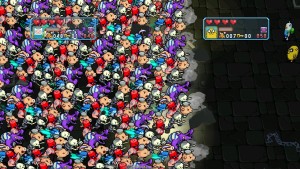 This was on sale and even though I know it’s not supposed to be very good, we are big fans of the cartoon and it was very cheap. And it’s multiplayer co-op.

It’s not too bad, actually. For the most part it plays like Gauntlet, complete with food and baddie generators and smart-bomb magic, but there’s also a Rogue Legacy style shop system. You can quit the dungeon after every 5 levels, and then spend your money to get better stats, but any money you have left is lost when you return to the game. The best bit is how the Gamepad becomes a giant Beemo face, who comments on your action with such gems as “food is where the hearts are!”. Excellent. 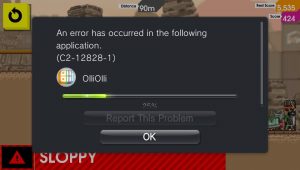 With various deals and cheap credit, I got this for less than £2. I’ve wanted it for a while, but keep being put of by people who say it’s rubbish. At that price I thought I’d risk it. And I’m glad I did as it’s pretty good.

It’s no Tony Hawk’s, obviously, but is instead an endless runner with things to grind on and ollie off. It’s all about timing, and the tricks are more like the Skate games in how you flick the stick to pull them off.  Was getting well into it, and then it crashed. Bah. 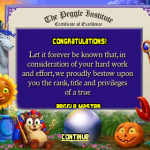 It’s just Peggle. Again. And it’s as great as it ever was. And now I’ve completed it. Again. I’m not really sure what else there is to say? 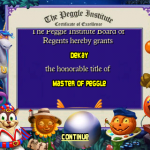 Since I’d never played Peggle Nights, but have completed Peggle on both the iPod Nano and XBLA, I thought I’d play Nights first. And… it’s just Peggle. Only with different levels.

After a couple of days play (doing levels here and there) I completed it. There’s not a lot to say, really, except that as before, it’s addictive and frustrating in equal measure. And is only 59p! Er, so long as you’ve already bought Peggle (which was also 59p) of course.

The last 5 levels were far, far harder than I recall them being on the iPod version, you know. I ended up fluking two of them!

I bought Peggle on XBLA.

And? It’s the same game as the iPod one. It even has the same level layouts. But that doesn’t matter, because it’s Peggle and Peggle is aces. So far I’ve only completed the first three “worlds”, though. Not because it’s hard, just because I didn’t get much time to play.

Working through the Challenge mode now, and some of them are bloody hard! Managed to do all the 35/45/55 peg challenges, and a few All Clears, but the 300,000 point ones are almost all beyond reach.

I think this would be my very first completed iPod game. Hurrah! The last five levels were indeed somewhat hard, with the moving helix on the last one being a pain especially, but they’re all pretty tough.

And that’s it! Well, except all the Challenge Levels. Ace!

When I looked at the iTunes store last night, I intended to only buy the recently added Sonic the Hedgehog. But somehow, I bought Peggle as well. And ohmygodwhat? It’s a bit bloody addictive, isn’t it?