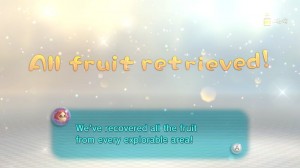 And go back for the remaining fruit I did. None of it was that hard to reach, but I did seem to be missing one fruit in the Distant Tundra area. Nothing was showing on the map, but I figured out it was a bunch of grapes I’d somehow not picked up (even though I recall doing so), so headed for where they were.

Only to find a single grape was there. Just one. How I missed one, I don’t know.

With all the fruit collected, I beat the final boss again, and got the Good Ending. Woo! 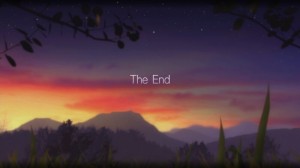 15 hours, apparently. Which equated to 39 in-game days. That’s how long it took me to find the Cosmic Drive key, best the final boss, and escape from Certainly Not Earth and head home with all the fruit juice and seeds I could carry.

Well, most of the fruit juice and seeds. 43 of the 66 fruits available, in fact.

And rather a lot of carrotmen died for the cause. Er, about 700, all in. Which sounds horrific, but you have to remember – without my intervention there’d be only 5 of the things in total. It’s only thanks to my Pikmin Breeding Programme that almost two thousand tasty, tasty Pikmin were even brought into existence, so it’s worth it, overall.

But the game! I haven’t mentioned the game!

It’s Pikmin. In fact, it’s just like Pikmin 1, only without the hard limit on how many days you can stay on the planet before you perish. Sure, there’s a movable limit (it’s determined by how much juice you have – but I had enough for another 30+ days when I’d finished), but it takes away all the stress of rushing the game. There’s still a daily time limit, but that’s not so bad. Aside from when you get near the end of the game and SPOILER happens and you’re left with no juice at all and have to get some quick sharp that very day (and, probably, the next couple of days too).

You have a couple of extra Pikmin types over the first game (and lose the purple and white ones from the second game) – weak but flying pink ones, and heavy rock ones – but the main difference is the graphics. Oh my, the gorgeous, HD, colourful beautiful graphics.

I controlled the whole game with the GamePad. Sure, lots have said it’s better with the remote and nunchuk, but I couldn’t be bothered with that. I didn’t feel out of control at any point anyway, and having the map in my hands was very useful, especially for directing my crew around.

Next task is to return to the game to get the last of the fruit, which I’ll enjoy doing because it is an utterly fantastic game. It might be almost a year later than expected, but it was well worth it.