Do you remember a while back, when they did that Nintendo Humble Bundle? That was great, wasn’t it? One of the games in that pack was Retro City Rampage DX for the 3DS. I’d already completed the game on the Xbox 360 a couple of years back, but was ready to do it again – this time with a decent d-pad.

The DX version is supposedly improved. In what ways I’m not completely sure, although it seems that some missions have additional midway restart points. I might be wrong, but I’m sure I found some of them (like the Smash TV section, and the Buttnick fight in the castle) must easier this time.

Aside from imperceptible after all this time changes, it’s the same game as before. It’s still funny, it’s still varied, and it’s still bonkers. The lovely retro pixelness of it all seems to fit a lot better on the 3DS screen though, and being able to touch the bottom screen to select weapons, or use the map, is a nice addition too. 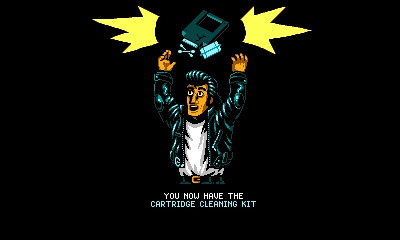 I haven’t done many side missions, as I was mainly focusing on the main story, but Retro City Rampage is definitely going to get brought out again whenever I need to mow down some pedestrians. Which happens rather a lot. Some of the mini-games need some more play too, so it’s nice to have it installed on my 3DS for whenever. 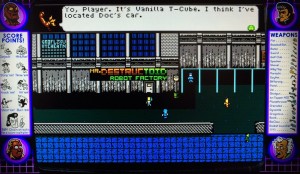 What a totally nuts game. So many ideas, parodies and play styles all thrown together, seemingly randomly, with intentionally terrible (well, great retro but terrible modern) graphics[ref]Which you can change to make look even worse! Like it’s a C64 game or it’s running on a Game Boy![/ref] and sound and garnished with groan-worthy puns and not-so-subtle innuendo.

One minute you’re in the sewers beating up ninja turtles, the next you’re a Ghostbuster, before taking part in a clone of Smash TV (where at one point you end up in the wrong TV studio and interrupt Phil Fish being interviewed), all via some Solid Snake Inna Box and pretending to be Batman. Not to mention Paperboy, Super Hang On, ‘Splosion Man and so many more. And GTA, which the main game overworld apes so obviously.

There are references to retro and modern games, TV and films everywhere. The developer pokes fun at terrible practices at large gaming companies at every turn. Games programmers, reviewers, PR people and “celebrities” pop up all over the place. There’s so much fun to be had before you even play the game.

Thankfully, the game still stands up as a game worth playing. Somehow, stitching these tropes and parodies together actually works. The game even riffs on itself by apologising for the tedious bits, using some deus ex machina to skip some sections that are obviously going to bore you (one fetch quest is cut short with a never used again warp whirlwind, a-la Mario 3). In fact, even some of the more difficult stages give you the option of skipping them, or you’re loaded up with better weapons to make things a bit easier. Add to this instant restarts and pretty frequent checkpoints and it’s clear the developer doesn’t want you to get bored.

Unfortunately, some of the stages are still a bit on the hard side (especially the final few), but that’s to be expected, I suppose. I did put some of the deaths down to a bizarre problem my 360 pad has developed where it moves to the left by itself. Odd.

Overall, well recommended. And other off my Pile of Shame. Phew!