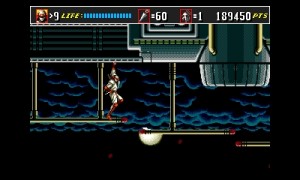 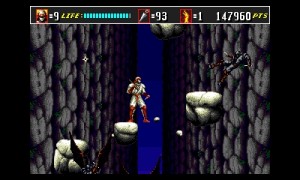 It’s been a while since I played Yakuza 3. I did really enjoy it, but never got round to picking up Yakuza 4, probably because it was a PS3 game and I don’t really like playing PS3 games, however good they are. However, for reasons I won’t explain, I got a PS+ subscription and with it came Yakuza 4.

I’m a few hours in, and have spent most of the game so far watching cut scenes, playing with UFO Catchers, opening lockers, and buying clothes for girls. And a few fights, but not many. It’s good, but so far it seems to just be Yakuza 3 with a new story and no mobile phone camera. The asset reuse is high with this one. 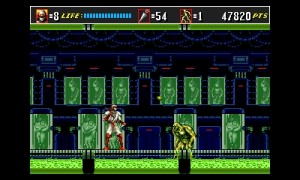 When 3D Outrun was released this week, a few older 3D ports were reduced in price. I picked up Altered Beast (I’m sorry. I’m so, so sorry) and Shinobi III. I was pretty sure I’d played Shinobi III before, but it appears not. I don’t recognise any of the levels so far, aside from seeing screenshots in magazines. It’s great, and not as hard as I was expecting (Revenge of Shinobi was virtually impossible, I seem to recall). The levels disjointedly follow on from each other with no obvious link, but that’s par for the course for games of this age, I suppose. I’m only a few levels in, but really enjoying it so far.

Still playing this off and on. As I’ve previously mentioned, I’ve completed the game, but I do return to have a few goes at the special stages or to try and capture a few missed pokeymens. 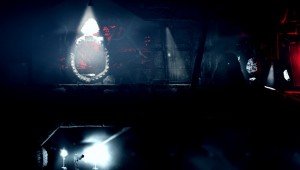 I’m not sure if I’m enjoying this. I sort of like the setting, but the way you generate clones and can transfer into them feels slightly too vague to control. Also, some of the puzzles are such that completing them feels like you’ve kludged it or brute forced it rather than actually found a solution. I also don’t like how you have to turn your man around by using the on-screen pointer rather than just pressing the opposite direction like in almost every other game ever. Still, it’s a free PS+ rental so I’m not too bothered if I don’t play it again, although I suspect I will. 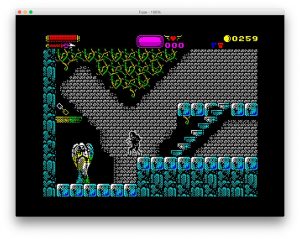 Someone made a Castlevania game for the Spectrum. Oh my. And not only that, but it’s polished to within an inch of its life, it plays flawlessly, looks fantastic, and even – somehow – fits into the normal Castlevania timeline. At least, until Konami rebooted it with Lords of Shadow, anyway. I’ve beaten two bosses, collected the double-jump artifact, and am generally loving it.

Somehow I have become involved in the comp.sys.sinclair Crap Games Competition again. I’m not sure if this is a good thing or a bad thing, as I’m having to play some terrible, terrible games. Intentionally terrible games too. I think they’re driving me a little bit mad. Take a look here.

It seems the best way to make money is to buy all the houses and shops, then just leave the Xbox on all day. So I did that. Now I have over 8 million gold, can pay off all my debts, and progress with the story. In doing so, I’ve revisited Aurora, pilfered a diamond from a cave, bought more shops and houses, and am now on the trail of a white Balverine in Silverpines.

I also changed my gun for a different one, because I realised that being able to do 79 damage was certainly better than just managing 33. Makes a bit of a difference.

I’ve not bought a 3DS Virtual Console game in a while, but since I had to add some more money to my account to buy Mighty Switch Force (see later) I thought I’d pick up some. One was this, a Kirby Breakout game where some levels have paddles at the top and sides of the screen, and have baddies wandering round. After reaching World 4, I also realised you could activate Kirby’s powers by pressing B. That would have made earlier levels somewhat easier, non?

This was another 3DS VC game purchase. The video on the eShop made it look like fun, but I’ve no idea what I’m doing. You control (well, you try to control) a little cute catbunnyblobthing. Thing is, he doesn’t jump very far and there are spikes. I did, through random button mashing, did manage to turn him into a fish (useless) and a thing with big ears (which can sort of fly but then drops to the ground for no discernible reason), neither of which I can reproduce nor were they of any help.

ACEBEST. So good, in fact, I rattled through the first 14 levels in half an hour. Then I found there are only actually 16 levels. This was a bit disappointing. However, I’ve spent over an hour since then and haven’t finished it yet as Level 16 is nuts.

In case you know nothing of the game, it’s a platform shooter puzzle game where the main “gimmick” is you press a button to make blocks move between the foreground and background. You can’t pass them when they’re in the foreground, but you can stand on them, and you don’t want to be moving them to the foreground when you’re standing in front of them. Unless they’re a special type of block. It’s all excellent though, and different to anything that looks vaguely similar.

Picked this up cheap from The Game Collection the other day. It’s very much a 2.5D spiritual sequel to the Megadrive “Revenge of Shinobi” game. The graphics are sort of stark and plain, but it’s fun. For some reason it reminds me of the DS launch title Spiderman 2, though. Maybe it’s the graphic style and all the fire.

I’m stuck though. Went on a raft into a cave, then wall-jumped up to a higher level. Now there’s a huge gap to the left too big to jump, and I can’t latch onto the cave roof to get across that way because there are spikes. Hmm.

Very much a Mash Y And Sometimes X game, but it’s fun. There’s a hook to get me back in with the RPG elements (leveling up your character, merging weapons to make better ones, and so on) though, and you do have to have a bit of strategy in the game to ensure your allies aren’t overwhelmed by foes and die because you’ve wandered off to cause carnage elsewhere or because you didn’t run to their side when they asked you to. Well worth the £7 Morrisons (yes, them again) wanted for it anyway.