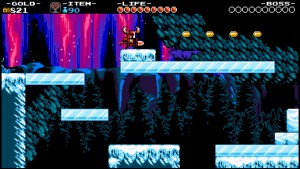 Alright, alright, calm down. I know what I said. I know I was trying to work through my already-started-games backlog before making a start on my bought-but-unplayed backlog. I’m sorry. I have no excuses.

But… what a game to break these plans with. From start to finish, Shovel Knight was a proper joy to play. The fantastically drawn pixel art, the outlandish characters (top of which is the half-trout, half-apple Troupple and his amazing dance routine), the comedy dialogue, a frog who specialises in Shovel Knight themed puns, some of the best platforming in years, varied boss battles and an astoundingly good chiptune soundtrack. No, really. I cannot stress enough how incredible the music is. Especially the Lich Yard level, which is clearly Castlevania-esque.

In fact, I’m struggling to find anything negative to say about the game at all. Everything is borderline perfect. It feels like a modern day SNES game, with all the style games like Super Castlevania IV and Mega Man X provided, but with none of the technical limitations of sprite handling and slowdown. 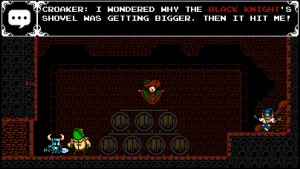 It took me just over six hours to finish, but because it’s so damn good, that was just two proper game sessions. The game stats show I died 80 times, which would suggest two things: 1) it was hard, and 2) I didn’t notice. In reality, it isn’t that hard at all. No, this isn’t me boasting about how great a game player I am – it’s more because I only recently finished off the much, much harder set of 6 NES Mega Man games. 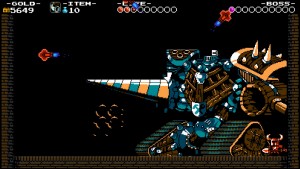 Several Shovel Knight reviews have complained (or complimented?) the game on its high level of difficulty, but I’m really not seeing it. You don’t have lives, and each death just makes you drop some (recoverable) gold and go back a few screens. Most of the bits I got stuck on, losing a string of lives, were late in the game and entirely my fault anyway – incorrectly weighing up risk and reward, or just not paying attention to have things moved or when baddies appear. Absolutely nothing to get frustrated at, at least, not for more than a few minutes anyway. Even the SuckySuck(TM) Bit at the end (that’s “Boss Rush” to those not in the know) wasn’t as much of an issue as I’ve found with other games. Yes, it’s a bit of a cop-out, but the battles are quick and you get your health refilled after each one anyway, so it only took me two or three tries. 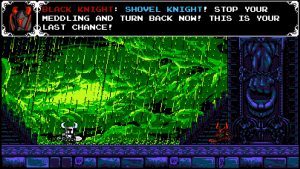 What I haven’t done, however, is collect all of the music sheets hidden around the levels, and I didn’t buy much of the armour from the flying blacksmith guy – mainly because although they all improve your stats in some way, most also come with a debuff side effect I wasn’t prepared to take. As it turns out, they were unnecessary anyway. Will I go back and mop up? Almost certainly. I’ve already started New Game+ after all…