A few years ago, I completed this on the Xbox 360. And now I have completed it on the Switch. As in, the NES game in the NES classics thing.

It’s a decent little vertically scrolling shooter with an odd bell shooting system (shoot bells enough and they go blue, collect a blue one to speed up your ship), and I lost my ship’s arms at one point so couldn’t drop bombs.

After beating the end boss the game loops back to the start, so no credits as such. Still, done. 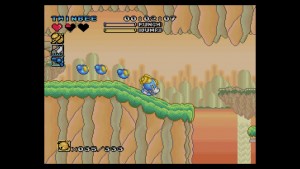 In a (very) late entry into completed games in the year 2014, I give you Pop’n TwinBee: Rainbow Bell Adventures! It’s not a shoot ’em up like the other Pop’n TwinBee games – instead being a platformer with some elements borrowed from the likes of Castle of Illusion, Sonic the Hedgehog and Super Mario World, but somehow totally different from all of them. 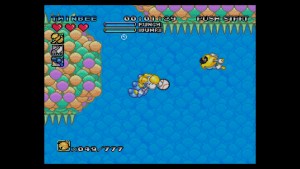 I have played it before, a long time ago in an incomprehensible Japanese form, but something made me want to buy the Wii U English eShop version a couple of days ago. I never got very far previously, but made an effort to complete it this time. 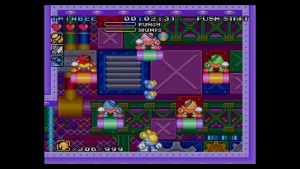 And it was great! I did find it pretty easy, most of the bosses especially so, but there were a couple of levels I was stuck on for ages. They were both maze-like and I just couldn’t find the right exit. One of them involved lots of pipes, none of which seemed to take me to the exit which I’d clearly seen but was unable to reach. Another was made up almost entirely of destructible blocks, and although I could locate the exit without much issue, the key on that stage (which you can use to open doors to bonus areas on other stages) was apparently inaccessible. After 20 minutes I gave up looking for a way in. 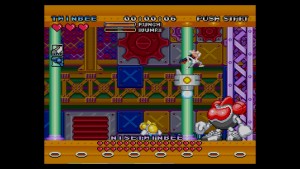 Which means I finished without collecting all the keys. I don’t think they’re necessary for anything special, though, so I’m not too bothered.

In all, it’s a strange but enjoyable (and very Japanese) game, with varied levels, and it’s a shame I missed it first time round and never paid it much attention until now. Perhaps it’s the way it’s a spin-off, as they often don’t fare too well, but in TwinBee’s case, it’s well worth a look.