Kirby and the Amazing Mirror (3DS)

Actually, the GBA version I got as part of the 3DS Ambassador thing. I thought I’d played it before, but I don’t actually remember any of it. It’s very confusing, as there’s no linear progression from level to level (like in Kirby’s Dream Land) or a map where you can replay previous levels (like in Kirby’s Adventure). Instead, there’s a complicated map system where you have to find different exits to access other levels, with occasional mirrors that are found which then leave a permanent link from the main “room” of the game to parts of the map. I suppose it’s a little bit how games like Metroid work, but the map is useless at telling you where you need to go, and it’s too easy to get stuck in a one-way route and have to redo miles of the game before you can try to find another route. I’m sort of enjoying it, but it doesn’t work well with quick bursts of play.

Not progressed much since last time I posted about this, but I have agreed to do some Thieves Guild work (which involves roughing up some locals for money) so started that. I also slaughtered loads of people in the Ratway. I didn’t want to, but they attacked me and things just spiralled into badness. Also: my Flame Atronach is awesome.

Having completed the main game, I was going to go back and collect some more trinkets. However, I got a bit sidetracked with the plethora of other game modes and alternative maps, and so went off and did some of those instead. I also stumbled across some of the “accessibility modes” in the options, so have set the game speed to 60% which makes some of the really hard sections a lot easier. I suppose it’s cheating, but meh – whatdahyahgonnado?

There was a patch for this in the week, so I decided to give it another try online. Had some great games with randoms, and I didn’t even come last most of the time. Unsurprisingly, not a single person chose to play the now-fixed (thanks to the patch) Wuhu Loop track, which certainly made it more varied. I think I was suffering from nasty lag though, as some of the other racers appeared to be invincible to my shells, or seemed to get blown up randomly even though nothing seemed to hit them. That’s my connection though, not the game.

I’ll post more about this another time, but it arrived today and my daughter thinks it’s amazing. I enjoyed the half and hour or so I played it for too, so could be a hit. Glad I got it for about £19 though, not the £60 or whatever it was when it came out last year.

Oh! It looks so lovely! 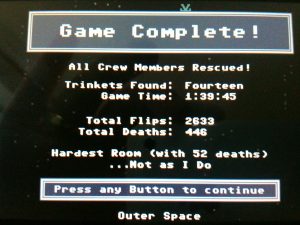 At last, I’ve been able to get hold of a version of VVVVVV I can actually play! Yeah, I could have played it on the PC, but PC gaming is such a tedious chore I really couldn’t be bothered. I decided to wait (and wait, and wait) for the UK release on the 3DS, and here it is. Pretty sure the US got it months ago. Tch.

Look at my game record just there. 446 deaths. 446! And most of those were in the same section of the game – the “Doing Things The Hard Way” section. But, with perseverance, I managed to rescue my whole crew and complete the game.

Yes, I still have 6 (actually, 5 now since that screenshot) trinkets left to get, but I’ll get to them, I’m sure. Once completed, I then went on to play (and complete) Notch’s VVVV 4K version of the game (which, along with a load of other versions and modes is included), which was also excellent. And not as hard, thankfully.