I hate it and I didn’t want it. We’ve been through this. And I bought it for the iPhone and the 360 and the Wii. I know. Leave it.

So I played through the first half of the game today. And gained 23 lives on Casino Street Act 2, without even trying. And the game is still rubbish and it still doesn’t control like Sonic and I still won’t be buying Sonic Colours regardless of how good everyone is saying it is. Strong!

Another week of playing very little but this. After the stumbling block of getting the water sword, I’ve been progressing quickly – seeing off many of the 4* quests without any bother, including the Great Baggi quest, and the combo of a Great Jaggi and a Barroth – together. The Jaggi/Barroth quest was made somewhat harder by the mid-fight arrival of a Qurupeco, so I had to fight all three at once.

I also saw off the Lagiacrus much more easily than I was expecting, but the Rathian handed me my own bottom when fighting him, so I think I need to up some stats before returning there.

Hooray! I’m back in! After more than 70 kills or captures of Royal Ludroths, I finally got a crest drop! It came on a(nother) replay of the 3* Royal Ludroth hunt quest, appearing in the quest rewards after defeating him. Many many times I’ve already done this quest, and nothing. Gah!

But I’m over that little hurdle now, and am well away again. With the crest, I forged a new sword with water powaz, which I used to slaughter the Barroth I previously could barely scratch. After that, I had to kill the big angler fish thing in the Flooded Forest, which I did first attempt without any problems at all. I even then did the first 4* quest, which was incredibly simple – 20 Baggis? Easy!

So glad I didn’t give up on the game. It’s much too good!

Unfortunately, I think I’m coming to the end of my fun with this. I’m stuck, or rather, the game is stuck. I’m trying to obtain a Royal Ludroth Crest so that I can create a water-affinity sword to enable me to defeat the Barroth. Problem is that despite the crest having a 60-odd% drop rate (so long as you smash the crest on the Ludroth’s head), after almost 60 kills or captures I just ONE crest. And that was from my very first kill.

As a result, it’s no longer fun, and I’m not sure I can be bothered any more. It’s a shame, because it was excellent.

This is a big game, isn’t it? I mean, long. Huge. Hours. I’ve plugged over 20 hours (offline) and at least 3 (online) into it so far, and I’ve only just started the 3* offline quests and have barely touched the online quests – let alone go back to previous quests to complete the subquests I’ve missed.

For the first 10 hours or so I was totally lost. Everything was confusing, from inventory management, to farming, the way online works, quests and hunting, combining items, forging armour and weapons, upgrades, skills… the lot. After every quest or two the game threw in another thing to cope with (I can send fishing fleets off? There’s a chef? I can trade commodities?!), and even at 20 hours I’m still learning. How do I even work the bowgun? Why is the Switch Axe useless? Where on earth do I get all these items I need to upgrade stuff?

But it’s excellent. It should be repetitive, mundane, and full of grinding. But somehow, it isn’t. It’s fun, frantic (in places), sedate (in others) and has an OCD Factor 5 hook to keep playing. And who doesn’t like smashing dinosaurs the size of buildings in the face with swords as long as telegraph poles?

It’s the only thing I’ve played since my last post (well, aside from the usual iPhone trio of Words with Friends, Carcassonne, and THPS2), and somehow over the weekend and today I plugged enough hours into it in order to finish it last night.  I was convinced there was only an hour or two left, so started at 8:30 this evening and – well – it was almost midnight when I’d read the end credits.

As with CiNG’s other titles (e.g. the original Another Code and Hotel Dusk), the game’s “win” is in the story. Particularly in this case, the pacing of the story – how little side stories end up becoming parts of other stories, how bits of information are dropped here and there throughout the course of the game, and how some connections are just left to you to make yourself. The “game” is secondary to the plot, and it kind of shows in that it consists of little more than a few puzzles. Very few puzzles, when you think about it – especially since it took 16 hours to play through.

Some of those puzzles are great, though. The starting-the-clock-tower one was an excellent, more traditional, puzzle, whereas the item-in-the-box puzzle from the game’s final chapter was outside-the-box genius. The TAS door lock puzzles, however, started to grate near the end of the game (especially since the last few hours has so damn many of them), and when they started needing you to rotate the Wii remote in addition to button presses, they just got frustrating rather than hard.

As I said though, story is everything here, and it really makes you want to progress. Just don’t be afraid of a lot of reading!

Before I rushed back into Super Mario Galaxy 2 to get a load more stars, I decided to play something else I’ve had on my To Do list for ages. Something a bit different to Bioshock 2 and Mario.  So I chose point-and-clicker Another Code:R for the Wii.

I played, loved, and completed the original on the DS what seems like ages ago. Oh, it was – just over 5 years ago! Good lord.

5 years in real life have passed but only 3 in Ashley’s world. The intro and some of the first flashbacks helped remind me of what happened in the first game, which was very helpful as (ironically, given the plot) I’d forgotten most of it. Actually, it seems so had Ashley. Silly girl.

I’ve put almost two and a half hours into it so far, but there’s very little story yet, despite the masses and masses of dialogue I’ve read through. I suppose so some people that would be annoying – it is very chatty – but I’m taking it as an interactive book, like the original, so it’s fine.

Slightly disappointed there haven’t really been any puzzles so far though. The only difficulties have been how to use the controller to do something (like moving a door – that was a pain), but then, I am only half way through Chapter 2 so it’s still in-game-tutorial territory.

I’ve been playing this since completing Bioshock 2 the other week, and last night I claimed my 70th Star, beat Bowser, saw the credits roll, then played for another couple of stars afterwards.

And I got this message on my Wii: 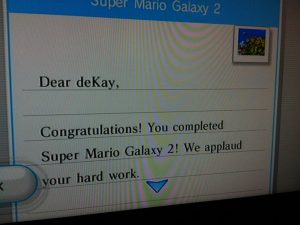 Obviously, the game is excellent. And yes, I’ll be returning to get the rest of the stars. It’s also at least as good as the first game, with the “hub world” being much better to navigate. However, I’m surprised at how easy the game has been (so far). With all the reviews suggesting it’s much harder than the original, I’m wondering why I’ve not found a single tricky level so far. And every single boss has been beaten first time – most without even taking a hit. 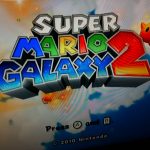 How can so many amazing ideas be crammed into one game? Some levels in Super Mario Galaxy 2 have more fantastic, original, gameplay ideas than most entire games. Even more amazing, is how they managed this even after already filling an entire game with them!

I’m now up to 24 stars collected, on the 3rd “World” (you can’t really have worlds containing galaxies, can you?), and really loving it. It’s still very easy though – easier than the original was at this stage, I think. Even the Prankster Comet that I’ve done was pretty simple, and I’ve only died three times in total so far.

For just one level. For a reason.

I have my daughter to thank for buying me the game, which ordinarily I’d have had to have waited months and months for, since it’d take an age to drop in price to below my self-imposed £20 limit.

I got internet access back at home this week, finally, just in time for the release of Bit.Trip Runner. I’d played one of the previous Bit.Trip games – Beat – a while back, but found it way too hard. Although I liked the style, I didn’t bother with Core and Void as I thought they’d be too hard too.

With Runner, however, I couldn’t resist. I knew it was going to play like a “big” version of games like Run! on the iPhone and Canabalt, both of which I love. And Runner, too, is amazing.

Thing is, the instant-restart (you don’t press anything – you just begin the level again immediately upon death) really pushes the just-one-more-go factor, pretty much forcing you to play again, so it was quite difficult to stop!

I played a little bit of this last week, but have managed a few more hours on it over the last few days.

And I’m enjoying it less and less. A couple of days ago, I had to catch a fish. Which was fine, except it then took almost an hour figuring out that I wasn’t supposed to pick the fish up, but turn into the wolf and sniff it. Obviously. Then yesterday there was an awful snowboarding section. Yes, snowboarding. In Zelda.

Hmm. I’m now over 11 hours in. I’ve just got all the tears from Lake Hylia. And it still doesn’t feel like Zelda. It has the right place names, and the right characters, and the right music and sound effects, but it doesn’t play like a Zelda game.

I really, really, dislike the wolf bits. And they’ve made up more than half the game so far. And after 11 hours I’ve still only had 2 dungeons? It’s just not right.

Utterly, utterly compelling. Excellent script, brilliant story, and some amazing set pieces and twists. The end of Level 9 is a complete shocker too.

I’m always impressed by great story and pacing in games, and Dead Space: Extraction stands as one of the best examples of how to implement a story into a game.

Once again, like many games I’ve played recently, it’s a crying shame that nobody bothered buying this. In fact, on the back of it, I’m tempted to buy the 360 game even though it’s a FPS and I hated the demo. I’m that into the story now.

Taken as a shooty game, Dead Space: Extraction isn’t especially special. It’s pretty and everything, but there’s little variety in the baddies. It has some nice weapons, but once I obtained the line gun I found I didn’t need anything else (aside from the rivet gun for, er, the riveting bits).

However, taken as an interactive film, Dead Space: Extraction is fantastic. A plot to out-do many SciFi flicks, mostly excellent voice acting (although some of the accents do drop in and out a bit), and superb storytelling. With shooting!

In many ways, it feels like a cross between Aliens and Left 4 Dead. And it really makes me want to keep playing just to find out what’s going to happen next. Oh! And the unlockable comics are well worth playing for too.