I played and completed this before, but for 89p I couldn’t turn down buying it for the Switch and playing it again, especially since I enjoyed it so much first time around.

This time, I don’t think I found as many secret areas so didn’t get as powered up as I did before, but I didn’t really have any problems. Like I said last time, it’s not really difficult. But it is fun. A great, short, little Metroidvania game! 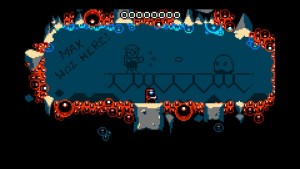 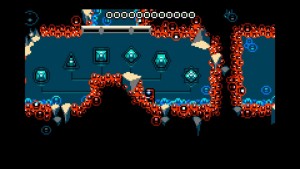 As you flit to and from four different planets in search of your damaged ship’s warp core, you pick up health and weapon boosts, improving your stats and making progress easier. You can reach deeper into the planets’ caverns by beating bosses, which provide you with new abilities – running across lava, turning into a submersible, swapping between the fore- and background planes, and so on. 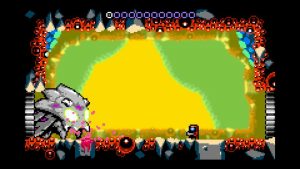 It’s excellent and fun, and like many of these sorts of games, becoming a walking tank later on and taking down what used to be virtually impossible baddies with just a couple of shots is always enjoyable. It’s compact, and even though there’s a lot of backtracking, it’s never a chore; in part due to unlocked powers granting shortcuts. I’d read in many places that Xeodrifter was really tricky, but I didn’t find that at all. A couple of bosses were hard, but since they were all virtually the same with an extra move each time you met them, even the toughest was a walkover once I’d learned the patterns.

In fact, the only real downer of the game is the cloned bosses. They are literally just palette changes with one extra move each. Since you become more and more powerful as you progress, they generally get easier too – not harder – with the final few taking one or two attempts, whereas earlier ones took 10+ tries. Despite this, Xeodrifter comes highly recommended for anyone who fancies a short but great looking pixelly Metroid type explorey game. Nice.