One of the (few) complaints I’ve seen people level at Yoshi’s Crafted World is that it is too easy. That none of the levels are a challenge. That the bosses are all a breeze to take down. Indeed, I’ve reached the end and beaten the final boss and I’ve barely a scratch. But that’s not the point.

Like previous Yoshi games, it’s easy for anyone to “complete”. To get all the secrets – all the flowers, red coins, hidden souvenirs, finish each level with full health, find all the Poochies on the flip side, finish the extra levels unlocked after the final boss – to get all of that, requires a heroic effort.

I’ve not given this game such an effort yet. But I did enjoy my path to the end. I tried to 100% it on the way but after a couple of levels where I didn’t on my first try I thought I’d leave it and come back. It’s a beautiful looking game, and it does that great Nintendo thing of being crammed with a million different brilliant ideas (in most graphics and gameplay), rarely to ever re-use them. You can imagine an entire game based around the Rhinono level or the creepy teddies with axes level or the duelling boats level or the solar powered racers level, but here Nintendo throw it at you then discard it immediately. How do they come up with so many ideas?

Judging from some of the requirements to get 100% I’m not sure I’ll ever make it, but I’ll certainly try for a higher percentage than I’m currently at! 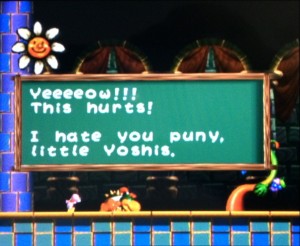 Yes, I know it’s not considered to be a great game. And I know it’s less than an hour long. And yes, I know it’s very, very easy. And I’m aware of how the graphics are a bit odd and how the viewport is too small and that the controls aren’t as tight as most Mario games. I know all this.

But it doesn’t matter because Yoshi’s Story is the most god damn happy game ever made and if you don’t grin from ear to ear for the entire duration you play, frankly you are dead inside and have no soul.

And I’ve just completed it on the Wii U, via the Wii. Because my daughter told me to. And it was great. So there.

The page was turned and the Yoshis grew happier.

This is actually only my third N64 purchase on the Wii Virtual Console. I have Mario 64, Mario Kart 64 and now this, which says something about the sort of N64 games I’m prepared to pay for again (I have them all already on the N64).

Didn’t play it for all that long, but did complete the first level three times. And could have done it twenty times more. It’s a great game!